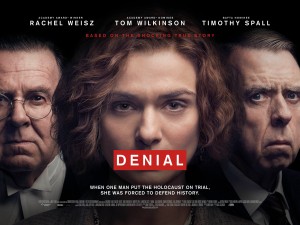 When acclaimed writer and historian Deborah E. Lipstadt (Weisz) mentions British historian David Irving (Spall) in a book about holocaust deniers, Irving accuses her of libel, sparking a huge legal battle. However, in the British court system, the burden of proof is placed on the accused, and Lipstadt and her legal team must prove in a court of law that the holocaust did actually occur.

Anyone who uses public transport (especially in London) would not have been able to escape the marketing for Denial and the main quote that states it as ‘the most important and urgent film of the year’. There is certainly no denying that the film’s subject is of great importance, and indeed the true story that it tells was of great and significant importance at that time. However, is the cinematic depiction of this true story important and urgent? No, it is most definitely not, due to the fact that Denial is a film that is far too generic and formulaic to be anything but a piece of vacuous entertainment.

There is no denying that the makers of Denial have managed to assemble a great cast, and the likes of Tom Wilkinson and Timothy Spall can make even the flattest, dullest script come alive with their great screen presence. However, there is no getting away from the fact that Denial is not only a painfully generic courtroom-drama-by-numbers, but also very televisual. Director Mick Jackson valiantly tries to give us some nice shots of London during various types of weather, but this cannot save Denial from feeling like a middle-of-the-road Sunday evening TV drama.

The great cast, great source material and fact that the film is made with a decent level of competence means that it is never anything less than highly watchable, but it never truly grips like it should. Even for those that do not know the outcome of the trial, Denial has no real fire in its belly, and so the narrative feels episodic and the continuous courtroom scenes start to feel repetitive, and it is only thanks to the great cast that they remain so watchable.

This is all very disappointing, as at the centre of the narrative is a very emotional and important subject, and this indeed should lead to the exploration of broader themes such as the importance of history’s darker moments, the lessons that can be learned, how important it is to remember such moments and how that can shape the decisions we make in the future. Though the film hints at these themes, it never really explores them in any satisfying level of detail, which is not only a shame, but also emphasises the lack of actual storytelling craft of those involved with the film. Denial is competent storytelling, and no more.

As said before, the excellent cast deliver predictably first-rate performances; Timothy Spall is electrifying and fascinatingly watchable as David Irving. Though of course it is a character with many highly disagreeable ideologies, Spall’s performance does certainly make the character interesting to watch. While Tom Wilkinson delivers a more suitably understated character as a barrister that is very much the chalk to Irving’s cheese. It is of course a role that a great actor like Wilkinson can do in his sleep, but he is as incredibly watchable a screen presence as always.

Though her Queens accent sometimes accent feels a little overdone, Weisz is solid enough as Deborah Lipstadt, but often feels like the co-star as Spall and Wilkinson dominate the scenery. Though as a British film it is great to see British actors being cast, but I do find it hard to understand as to why Mark Gatiss is cast a German professor. A great actor as he maybe, and indeed his German accent is fine enough, surely as he only has two scenes an actual German actor could have been cast? It is unfortunately a little distracting as it is unavoidable to think “oh, its Mark Gatiss”. Maybe this is a minor quibble, but perhaps if the film were more gripping then things like this wouldn’t be noticed.

As said before, there is no denying the importance of both the subject matter and the actual true story at the centre of the narrative of Denial, but it does feel there is a certain level of complacency from those involved as they think this and getting together a great cast would be enough. Well, though it produces a very watchable film, Denial is far too formulaic to be anything more than vacuous entertainment. What a waste.

Despite being based on a great and very important true story that offers so much potential for a great film, Denial plays things way to safe to be anything more than a watchable and very televisual experience, despite the great cast often elevating the lacklustre material.