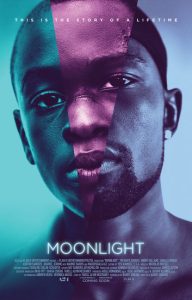 Focussing on three key time periods, Moonlight tells the story of Chiron, a young black man from Miami who struggles to find his own identity and place in the world.

The best films often do have at their core the simplest of stories, and Moonlight is certainly no exception to this. At its very core, it is a quite basic story of one individual trying to figure out who they are and their place in the world. Of course, what then makes a film good, bad or mediocre is how that said simple story is depicted and developed in a way that it can examine emotive and relatable themes, and this is indeed where Moonlight shines brighter than so many other films with a very similar initial premise.

Barry Jenkins’ film is very much made on its own terms, with the director being very much in charge of his film, and is at times poetic and tender, while also equally raw and uncompromising. Though there are a few narrative contrivances, and the intentionally episodic and ambiguous narrative does sometimes make the film a little too challenging to watch, and therefore a little alienating.

For me, the most important thing about a film is whether I can engage with the characters, care about them, and want them to succeed in their goals. This is most definitely the case with Chiron, as he is the victim of circumstance, but also his unique personality does also create some of his own problems. He is also a very relatable protagonist; every single one of us have certain universal needs, and in my opinion you don’t have to be black, gay, American or indeed all three to relate to the character of Chiron. Indeed, Chrion’s skin colour and sexuality may well bring about more severe repercussions in terms of the internal and external struggles that he faces throughout the narrative, but it is his one basic need that drives the narrative, and that is a universal need that is part of the human condition that we all have; to try and figure out who we truly are.

The performances are all excellent; the stand out is Mahershala Ali’s Oscar winning performance as Juan, who acts as a father figure to the younger Chiron. Though this is one of the more contrived moments of the film’s plot, his understated and sensitive performance makes him a magnetic screen presence, and also a vital character in Chiron’s life and the decisions he makes, despite him only being in the film’s first third.

Alex R. Hibbert, Ashton Sanders and Trevante Rhodes are all excellent as Chrion at the three respective points in his life, demonstrating the great internal vulnerability that he has throughout these three periods of his life. Excellent support is also provided by Naomie Harris as Chiron’s drug-addict mother; despite this aspect of her character, she is not just a clichéd and two-dimensional antagonist, and Harris brings depth and a tragic sense of vulnerability to her character. She probably has her own tragic story which may well explain why she is the way she is, but this is of course Chiron’s story. We all meet damaged people throughout our lives and wish we knew more about them so that we could understand why they are the way they are, but we often never do know, and Jenkins’ approach seems to very much reflect this.

Moonlight is yet another film that proves that no matter what budget restraints there are, if a director and his team put their mind to it, they can still achieve their own unique vision. Moonlight was made on a tiny budget, but yet is a beautifully cinematic film, where its style only serves to complement the themes of the story. Jenkins’ often gives us intense close ups of characters, and this focus on character’s facial expressions enhances the examination of the internal conflict and confusion that many of the main characters frequently experience during the narrative. Nicholas Britell’s score is quite unique, but certainly adds a further element, while James Laxton’s cinematography is exceptional, especially during the night-time setting of the film’s final third.

If Moonlight had a bigger budget then it may well have had studio executives interfering, which would have diluted a lot of the film’s raw power. Barry Jenkins certainly has a unique approach, and Moonlight is perhaps not always as involving as it could have been, and does not even attempt to answer many of the questions that it poses. However, these are poignant and often quite relatable questions that we can apply to our own lives, and that is one of the many reasons as to why Moonlight is such a powerful, unique and haunting film.

A deeply engaging film that successfully manages to be both brutally raw and beautifully poetic; though Moonlight may not be perfect, it is a triumph in low budget film making.