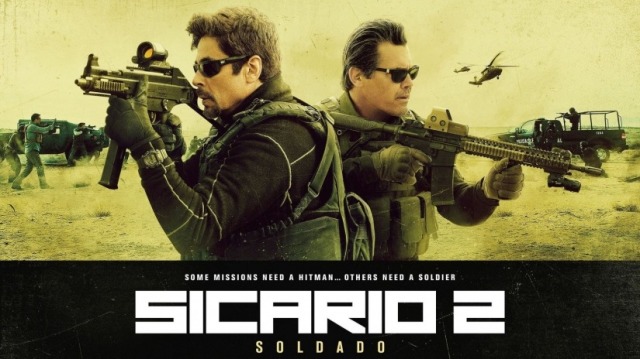 The drug war on the US-Mexico border has escalated as the cartels are now trafficking people, including terrorists, across the border. In order to combat this new deadly threat, FBI Agent Matt Graver (Brolin) re-teams with operative Alejandro Gillick (Del Toro) to start a war between the cartels, which includes the kidnapping of a cartel leader’s daughter. However, things do dot turn out exactly as they had planned, proving a test of their commitment and loyalty.

In my review for Denis Villeneuve’s excellent Sicario in 2015 I mentioned that it had a rather generic plot, but it was how it turned the plot into an involving character driven narrative combined with some extremely well staged set pieces that made it such a great thriller that was superior to most of the similar films that come out these days. In Sicario we truly felt part of the Emily Blunt’s protagonist’s individual narrative journey as we learnt as she learnt, and this provided a far deeper level of engagement than the generic plot would have provided on its own.

Well, gone are Villeneuve and Blunt, and though new director Stefano Sollima goes for a similar approach to Villeneuve and puts together some well-paced and suitably brutal set pieces, this time Taylor Sheridan’s script just lacks the narrative focus or genuine substance to prevent this sequel from all feeling a little too generic, and so therefore rather cold and uninvolving.

This is apparently going to be a trilogy, which is slightly odd considering Sicario is part of screenwriter Taylor Sheridan’s ‘Frontier trilogy’ that also includes the excellent Hell or High Water and Wind River, but either way, Sheridan will need to up his game for the third instalment as it often feels that he loses control of his script. The film starts off with some brutal sequences showing suicide bombers entering an American supermarket, and there is no denying that it grabs our intention, but then we are given some extremely tenuous reasons as to why this links to people trafficking across the Tex-Mex border and starting a war between the Mexican drug cartels. It is often hard at times to remember why the main characters are doing certain things, and the justification of this at the time was also a bit too questionable. There is also a subplot involving a young American getting involved in people trafficking over the border, and though this has some potentially interesting elements, its incorporation into the overall narrative is jarringly contrived, and so takes away any real power or genuine interest.

As the ‘plot’ develops Sheridan relies way too heavily on narrative contrivances and a few plot holes, and though these may be forgivable in films that take a different approach, but they feature in a film like Sicario 2: Soldado that takes itself very seriously and adopts a stoic and moody approach, they become quite glaring and certainly remove an element of the gritty realism that the Sheridan, Sollima et al are trying to go for. At over 120 hours Sicario 2 is also quite a long film, and with the lack of genuine substance or engagement, instead of building tension, these sequences can border on feeling like pretentious and dare I say it, a little boring. There were definitely a fair few moments where I felt restless and just wanted everyone to get on with it.

Sicario is by no means a bad film, but just a functional one, and it does have some good moments. There are some very well staged and intentionally brutal set pieces, with long takes adding to the sense of realism, and every bullet shot is most certainly heard and felt by cast and viewer alike. Though Sollima’s constant panning shots of armoured vehicles does at times verge into self-indulgence, he does effectively create a sense of brooding atmosphere, and this is further enhanced by Dariusz Wolski’s often cold cinematography, while Hildur Guðnadóttir’s brooding and thumping score is very much in tune with the late Jóhann Jóhannsson’s score for the first film, and uses some of the same distinctive riffs very effectively. There is also a fitting tribute to the late Icelandic composer in the credits, and I am sure he would have composed the music to this sequel had he not passed away, Hildur Guðnadóttir was however involved in the composing of the score to the first film, and so takes control of the baton with great aplomb.

As with its predecessor, one of the main strengths of Sicario 2 are the performances, and once again Josh Brolin and Benicio Del Toro excel in the roles as well as a chemistry that enables us to believe in their professional relationship and mutual respect for one-another, and they definitely bring something extra to their characters when the script sometimes fails to do so. Brolin caps off an already excellent year with a committed performance of raw masculinity, but he makes sure that his character is far more than just a generic maverick who courts danger, meanwhile Del Toro gives a more nuanced performance, and brings a level of sensitivity to his character. The main plot strand of the kidnapping of a cartel leader’s daughter offers his character a small element of redemption and catharsis, and Del Toro’s performance helps to give some emotional substance to this plot strand, making some of its contrivances a little more forgivable.

As the story plods along at an intentionally slow place, there are moments that will thrill and some that will bore, if this is to be trilogy, then part 3 needs to have a bit more focus if it is to be any more than just a generic action thriller.

Despite having the brooding mood and brutal rawness of its predecessor, Sicario 2: Soldado just lacks the substance and emotional engagement to go with it, producing a film that thanks to the two great leading performances is watchable enough, but highly forgettable.

An extremely passionate and (semi) opened minded film reviewer, with a hint of snobbish.
View all posts by MoodyB →
This entry was posted in All Film Reviews and tagged Benicio Del Toro, entertainment, film, film review, josh brolin. Bookmark the permalink.