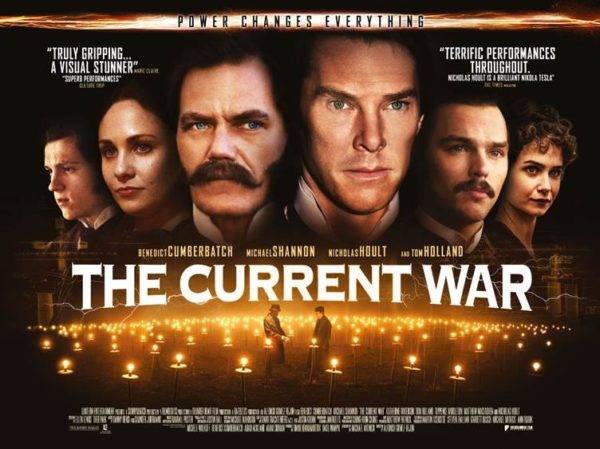 Thomas Edison (Cumberbatch) and George Westinghouse (Shannon) – two of the greatest inventors of the industrial age – engage in an increasingly intense battle of technology and ideas that will determine whose electrical system will power the new century.

When the quotes used on the posters for a film seem to predominantly refer to the performances, it can often be a stark warning that everything else may be somewhat lacking. Well, unfortunately it is proven to be an accurate warning for The Current War, as despite an electrifying cast and source material, it unfortunately ends up being a very generic and messy film that lacks any real spark.

It is a film that reportedly had a troubled production (it is produced by the Weinstein Company) and the producer’s initial hopes that the film would light up the awards season were effectively lost power due to a poor reception on the festival circuit. Indeed, its concept is very much Oscar bait, but the excessive weight of just how much the narrative tries to cover leads to a very disjointed narrative that often short circuits and has no true flow or current. The undeniable fact is that there is so much to cover here and doing justice to not only what these visionary individuals did for modern day society, but also trying to examine their individual characters is an almost impossible task for any feature film to take on. In this day and age of big budget TV series it is surprising that The Current War didn’t get the same treatment, as this would have allowed the necessary time to do what a feature film simply cannot.

The first half of the film flows at such a breakneck speed, flipping between the two main protagonist’s various personal and professional struggles and breakthroughs, with director Alfonso Gomes-Rejon’s strange, swooping camerawork and the rapid, quick-fire editing causing quite a visual surge that causes way too much friction. It is almost impossible to engage with either the overall story or its main characters, and the film fails to capture just how much of a defining moment in modern history this was. In the film’s second half it does settle down somewhat, and there is the occasional interesting visual moment that feels quite cinematic, but it is still hard to really care.

Screenwriter Michael Mitnik was always going to have a difficult task; make explanations of complex science accessible to those without an engineering degree while also trying to make it an engaging, cinematic story. It is a very difficult high-wire balancing act that he sadly fails at, with dialogue heavy scene-after-scene of clunky exposition intersected between the occasional brief moment examining the characters personal lives, or a character making the inevitable wannabe Oscar speech about what it means to be remembered when one’s light has stopped shining. All of these three individual components could have been foundations for three potentially very different and very interesting films, but Mitnik’s attempts to try and balance all three just leads to a very empty viewing experience of which any memories of it lose power immediately as the closing credits roll.

This all really is a true waste, as the great cast do what they can with the material they have; the troubled, misanthropic genius is a character that Benedict Cumberbatch is certainly used to playing, and he tries to give some kind of depth and intrigue that the story (except a moment of personal tragedy) fails to give to Thomas Edison. Likewise, Michael Shannon (an actor who can always be relied upon to effortlessly bring gravitas, masculinity and intensity to any role he plays) has the better material, but even this fails to do any real justice to the situation. As the narrative progresses it is hard to really care about the two characters rivalry and the couple of moments when the two of them do share the screen also lack any true dramatic flair.

With so much to fit into the running time, the talented supporting cast get even more cut off; Nicholas Hoult’s Nikola Tesla is certainly the most intriguing character (and Hoult’s accent is better than David Bowie’s), but despite the blatantly obvious crucial role that his character played in everything that unfolded, his character feels very much there at the narrative’s convenience. Meanwhile, Tom Holland has even less to do as Edison’s loyal assistant Samuel Insull, but Katherine Waterston does give verve and energy to her performance as Westinghouse’s wife in the few scenes that she does get. Her performance is one of the few shining lights in what is otherwise a very messy and disjointed story that lacks any true power.

A classic example of great source material, great cast, poor execution; the talented cast do what they can with very lacklustre material that lacks any real focus, leaving The Current War with a fuse that fails to get anywhere near being truly lit.