Genre: Horror / Drama (but not really either)

During the busy January sales in a retail department store a cursed red dress sold by the store passes from owner to owner – including lonely single mother Sheila (Jean-Baptiste) and soon to be married couple      Reg (Leo Bill) and Babs (Squires) – with devastating consequences.

Peter Strickland’s latest cinematic odyssey of the bizarre is likely to be his most divisive yet; there will be those that hate it by instantly dismissing it as a pretentious art-film, while there will be those at the other extreme of the spectrum that try to find some deep meaning or metaphor in every single scene, shot and piece of dialogue, and then be very smug and self-righteous about it and basically say that if we do not agree with them that we all philistines. Well, I certainly fit with neither of those extremes, but I did really enjoy In Fabric and would recommend it to anyone who is both a fan of the medium of cinema and an appreciator of what cinema can do. I would argue that this is a film where what the viewer gets out of it solely depends on what they are willing to put it in.

As stated, I certainly do not subscribe to either of the extremes that I have just described, but my take on In Fabric is that it is an inclusive cinematic experience in which Strickland wants to have some fun with all the tools that he as a filmmaker has available to him, and very much invites us the audience to have some fun with him. In Fabric is a film that is equally disturbing, confusing and hilarious, and when appreciated and accepted on those terms is a thoroughly enjoyable experience.

For me ‘experience’ is the key word here; In Fabric is all about that experience, as we the viewer are treated to many different visual styles and sounds, with some beautifully put together sequences that feature a set design with an obvious pain-staking attention to detail, while there are an abundance of various sounds and uses of music that have a very much retro feel of so many different styles of films that we have all seen before. The key is that everything is put together with a sense of fun and enthusiasm, and this is perfectly summed up by the constant sense of humour that runs throughout the film. In Fabric does have some truly hilarious moments, even if some of the hilarity comes from the sheer randomness of what is happening on screen – which is in my opinion all very much intentional. 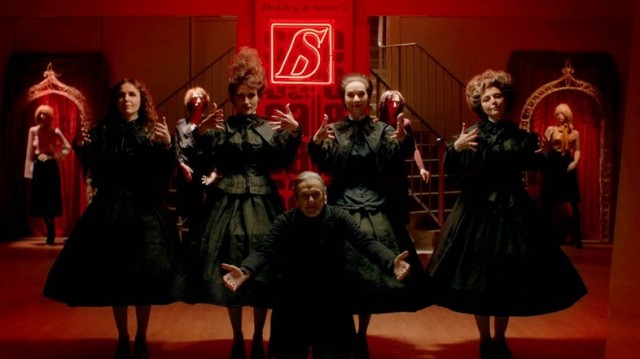 There are many scenes that, if studied on a deep analytical level, make absolutely no sense and perhaps feel random for the sake of it, but (in my opinion) Strickland is not trying to confuse (and therefore alienate) the audience by making things overly cryptic and confusing. To try to make sense of some of the more bizarre individual scenes or plot developments is to miss the point in my opinion. It is all about having some fun with genre, convention and style, and for those of us willing to embrace this, In Fabric is a thoroughly enjoyable cinematic experience.

There are of course also moments of genuine darkness and nastiness, as to be expected from a film of this genre (!). both of the two main characters of Sheila and Reg do have their own individual initial arcs (as do some of the supporting characters) and we do end up feeling an emotional connection with them, proving that Strickland does also understand the need to give us characters to engage with and care about. The performances from all involved are perfect within the context of the narrative; Marianne Jean-Baptiste portrays her character’s vulnerability perfectly, as this is one of the main reasons why she purchases the dress. Meanwhile, Leo Bill (a main blessed with the unique features of the classic ‘him from that thing’ actor) is also great as Reg. The two standout performances have to be Julian Barrett and Steve Oram as the hilarious double act Stash and Clive – the fact they are even referred to together in the opening credits together ‘as Stash and Clive’ once again confirms both Strickland’s attention to detail and playfulness.  I will of course refrain from going into what happens to the main characters, but Strickland’s ability to produce interesting, unique and engaging characters further confirms that he does truly understand cinema and all the various components of filmmaking. From start to finish, In Fabric is a film that does some nasty things, weird things and hilarious things, and for those willing to embrace the ultimate sense of fun that Peter Strickland is making his film with, will be amply rewarded by a unique and rich cinematic experience for all the senses. Understanding the plot may usually be the most important thing for films, but in the case of In Fabric, it is more important to understand what the filmmaker is trying to do, and in doing that it is a film that unlocks many rewards.

Though it is undoubtedly a film not for everyone, for those willing to embrace exactly what Peter Strickland is trying to achieve with In Fabric it is a thoroughly enjoyable and often hilarious cinematic experience for all the senses.