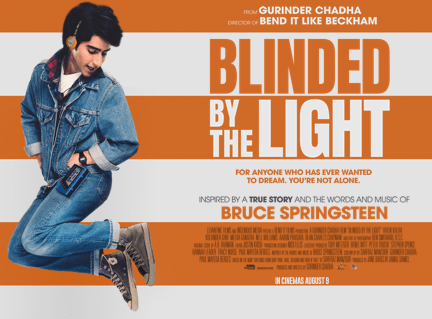 Javed (Kalra), a British born teenager of Pakistani descent experiences not only the difficulties of growing up in the racial and economic turmoil of 1987 Britain but also the inflexibility of his father’s (Ghir) very traditional views. When a classmate introduces him to the music of Bruce Springsteen, Javed sees parallels to the lyrics in the songs and his own life, and they help him to find an outlet to release his own pent-up dreams and for him to express himself in his own voice.

Every year there are a good handful of films that manage to find a quote from a review that states ‘feel good film of the summer’ or, gulp, ‘feel good film of the year’ that they can then use and display in huge writing on their marketing. The only reassuring thing about these very British films is that they tend to stay very firmly in the middle of the road and usually star the likes Lily James or Bill Nighy. They serve a purpose, but never live very long in the memory as they are just consistently nice films. For me a proper ‘feel-good’ film purposefully drags the audience down to deepest of despair to ultimately pick them up, actually making the ‘feel-good’ factor genuine.

However, sometimes these films do offer more than that, and this hideous ‘feel-good film of the summer’ tag may look good on the poster, but actually fails to do them proper justice. There is much more to these films (Pride being a recent example), and though they certainly may have moments that ‘feel good’, they also contain genuine substance and emotion, and therefore moments that do not necessarily ‘feel good’. However, these moments only make the ‘feel good’ elements of the film far more effective.

Blinded by the Light is such a film, in that this very marketable quote does not do it justice; this is a film with so much more to it than that. It is a film that encompasses so many relatable and emotive themes; family relationships, friendships, a first love, trying to find one’s place in the world and the great joy, inspiration and escapism that music can give. There is however even more to it than it; there is also the substance of the fact the film captures perfectly the political and social issues of the time it is set and incorporates them seamlessly into the narrative. This is a time when there was an extreme right wing that fought some extremely nasty campaigns, while there is also an element of anti-Thatcherism (though there aren’t exactly an abundance of films that are pro Thatcher), however this is never over-bearing to detract from the simple but universal themes of the narrative.

Though a vast majority of us may have not been in exactly the same situation as Javed, we can certainly relate to him, as some of his struggles are universal to the human condition, while those that may not be quite so universal are developed very effectively by the plot and the development of both his character and that of the supporting characters. I am sure that at some point in our respective lives we have all felt lost, alone and are struggling to figure out where we fit in and what our purpose is, and our protagonist asks himself these relatable and universal questions during the narrative of Blinded by the Light. 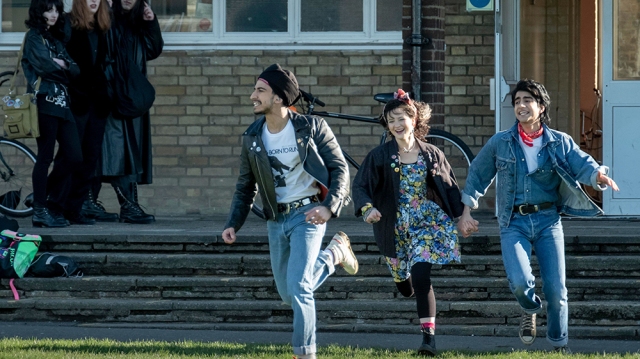 This being a film, and despite being based on a true story, there are of course some narrative moments that rely on coincidence and contrivance, and there are of course the usual moments where certain characters fall out, while there is naturally the inevitable scene in which a character makes an emotional speech in front of a huge crowd (without any interruptions). These are of course inevitable moments that are always going to happen, but thanks to the fact that Blinded by the Light offers so much genuinely relatable substance that these more inevitably clichéd narrative moments are more forgivable, with the scene involving the inevitable public speech  actually being genuinely emotional thanks to what has preceded it.

The performances are also strong; Viviek Kalra is superb as Javed, capturing perfectly both his character’s feelings of loneliness and isolation, but also his ultimate naivety. Kulvinder Ghir is also excellent as Javed’s father, making sure that his character is far more than just a stereotypical cliché, but a character we are able to understand and sympathise with. Likewise, all the supporting characters are developed well enough to have their own satisfactory character arcs. Blinded by the Light is a film filled to the brim with emotive and relatable themes, that though it may well have the inevitable ending to earn its ‘feel-good’ film tag, it is a deeply affecting film that will have an impact on the viewer and make them think about their own lives. So, maybe that ‘feel-good’ factor may depend on who that particular individual viewer who is and how they feel about their own individual lives at the time, but either way it is a deeply affecting and emotionally engaging film that will linger long in the memory well after Bruce has put his guitar down.

This is far more than just another ‘feel good’ film; Blinded by the Light is a film with an abundance of style, substance and relatable themes that will make sure to engage and inspire all viewers.