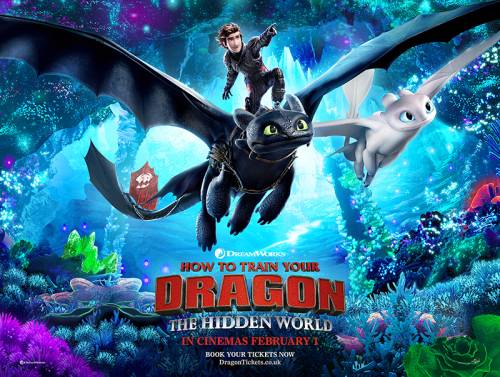 Now chief and ruler of Berk, Hiccup (Baruchel) has created a gloriously chaotic utopia in which human and dragon live side by side. However, after the sudden appearance of a female night fury dragon coincides with a ruthless dragon hunter (Abraham) being hell bent on destroying everything Hiccup has created, Hiccup and Toothless must leave the only home they have ever known to travel to a hidden world thought to only exist in myth.

There is of course an abundance of big budget animated films that are released these days, and as with all other big budget genres, a lot of these animated films are made with the minimal of effort, relying on lazy and cheap humour and even lazier storylines, as all involved complacently think that this will be enough to achieve the required profit margins. These producers basically think that if a film is colourful enough then that will do – which is very insulting to audiences of all ages, as the best animated films appeal to all audiences.

So far Dreamworks have thankfully avoided this (admittedly very easy to fall into) trap with their How to Train you Dragon films; these are films with genuine heart and substance that do not patronise or insult the intelligence of its intended younger audience, and are not afraid to tackle the bigger themes that can be applied to real life such as friendship, loyalty, death and realising one’s true potential. These films may ultimately be about dragons, but yet the stories to the first two films contain so many universal themes as part of their overall coming-of-age arc that are effectively incorporated into the narrative, that they are emotionally engaging on so many levels for audiences of all ages.

Thankfully, the third chapter is very much the same as its predecessors, and fittingly completes what is a stunning and unforgettable cinematic trilogy. The narrative this time involves the survival of Hiccup’s home town as their friendship with dragons poses greater risks from invasion from those that hate dragons, and though it may ultimately be the weakest of the three films in terms of its overal narrative that has a few clichés, especially the film’s rather forgettable antagonist. However, the admittedly rather simplistic narrative allows the film to focus on its key emotional themes. At the centre of this of course is the relationship between Hiccup and Toothless, and also both of their individual character arcs and the fact that everyone always doubts them and their strength of character. It is all dealt with an incredible sense of maturity by writer / director Dean DeBois in that he skilfully avoids patronising the younger audience by letting them take what they want to take from the film.

How to Train your Dragon: The Hidden World is also (as with its predecessors) a visually stunning film; the moments when our characters are flying really do capture the feeling of soaring freely through the sky, while the film’s many action sequences are also thrilling. When our characters enter the ‘hidden world’ for the first time it is a scene of stunning visual beauty that only an animated film can produce. Another contribution to both the emotional engagement and stunning spectacle of the film is once again John Powell’s amazing score.

Though this is of course a big budget film that exists to make a profit with an aim at a younger audience, it is so refreshing to see that a film like this can also have so much emotional depth, and (as with the previous films) How to Train Your Dragon: The Hidden World has this until its very end. It is an ending that is appropriate and unforgettable, and one of which makes sure that any viewer (no matter what their age) will not be able to have a dry eye, and for me is a fitting end to what has been a stunning and unforgettable trilogy.

A fitting conclusion to what has to be one of (if not the) greatest cinematic animation trilogies of all time; How to Train your Dragon: The Hidden World is a visually stunning film of incredible emotional depth and integrity.

An extremely passionate and (semi) opened minded film reviewer, with a hint of snobbish.
View all posts by MoodyB →
This entry was posted in All Film Reviews, Oscars 2020, The Best of 2019 and tagged animated films, Cate Blanchett, entertainment, F. Murray Abraham, film, film review, Jay Burachel. Bookmark the permalink.