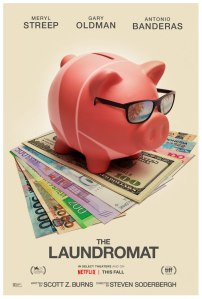 After her idyllic holiday turns into tragedy when her husband (James Cromwell) and many others are killed on a boat trip, Ellen (Streep) is informed that there is an issue with the boat trip provider’s insurance. She decides to investigate further, leading to a global path of corruption that leads to a pair of company owners (Oldman and Banderas) who own a Panama-based company that exploits the world’s financial system.

I bring you all some shocking and breaking news; there is corruption and greed in the world!

I am so pleased I watched The Laundromat, as without seeing this I would have carried on naively thinking that the world was a perfect place and all human beings were all completely selfless and wonderful creatures!

Well, at least that is what all involved in this bizarre mess of a film believe the audience to think about the world.

Based on the Panama papers revelations, Steven Soderbergh’s latest tries to be informative and alarming, while combining this with a slightly light humoured approach that is more than happy to break with narrative conventions. However, the information given is nothing new to anyone who has not been living under a rock for the last decade or so, while the fourth wall breaking, multi-story approach is not very entertaining, and ends up just feeling smug and self-indulgent.

The Laundromat is essentially a series of vignettes (and sometimes there are stories within these mini-stories) which is all ‘held together’ by Oldman and Banderas’ shady businessmen providing fourth-wall breaking narration along with excessive and patronising explanations of the history of money, and how to beat the system and essentially cheat and steal to get rich. This is certainly an approach that can work for a film that explores themes of corruption and greed, as was demonstrated very effectively in The Wolf of Wall Street (review) and The Big Short (review). However, those films managed to be both genuinely entertaining and contain characters that were actually interesting and engaging – even if they had a fair few unlikable qualities. The Laundromat has too many stories and characters for its own good, leaving both the individual stories and characters in them underdeveloped, and therefore lacking any kind of genuine interest or resolution. The story involving Meryl Streep’s character may evoke a little bit of sympathy, but this is ruined by the film’s ending. 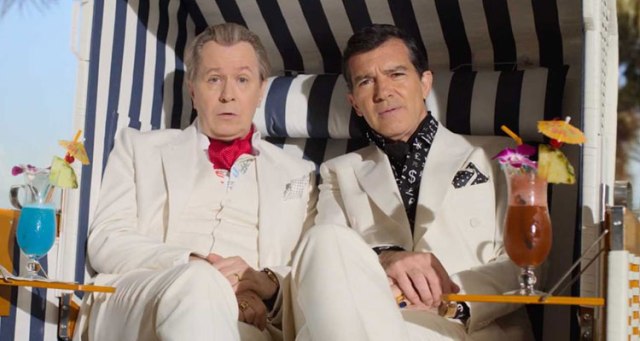 Though these individual stories presented may well form part of the themes of the overall narrative, those themes are so simplistic that the whole viewing experience feels disjointed and boring. What is also more frustrating is that a fair few familiar and very talented faces turn up in these small roles, but they all feel criminally underused (pun unashamedly intended). Antonio Banderas and Gary Oldman are obviously having a whale of a time in their roles, and they suitably ham things up, and as annoying as it is to see actors having a good time when you the viewer are not, they are one of the film’s few good points. I cannot comment on the book that The Laundromat is based on, but in terms of the film, the main problem is with Scott Z Burns’ abysmally complacent and hubristic script which only alienates and bores. This is perfectly summed up by a third wall breaking speech from Meryl Streep at the film’s end which seems to feel like it is revealing some kind of shocking, powerful and informative revelation about the world we live in – but it really is not for anyone who knows, well, anything. Burns is one of the writers for the new Bond film, so that is certainly less than encouraging!

Though I was ‘privileged’ to see this narrative mess at the cinema, The Laundromat is actually a Netflix production (which I believe will be available to stream from 28th October), and is sadly yet another one to miss. There is no doubting that this film contains an important issue at its core, but it needs a much better and coherent film to exmine it effectively.

When it is not being patronising, it is just plain boring; The Laundromat tries very hard to be both informative and entertaining, and sadly fails to be either of these things in quite a spectacular and frustrating way.