In 1988, a Philadelphia police officer named Thomas Lockhart (Holbrook), who has ambitions of becoming a detective, begins tracking a serial killer. When the same serial killer seems to appear nine years later and then nine years after that, his investigation leads to revelations that defy scientific explanation and lead to a personal obsession that threatens to not only destroy his own life, but also have a far greater effect on the future of the world.

I believe I have stated in my previous reviews of films directed by Jim Mickle (such as Cold in July (review) or Stake Land) that his film’s single minded ambition to combine genres is very admirable, and though he potentially has a truly great film in him, his films never quite manage to reach these heights for various reasons. His latest (which is being distributed by Netflix) is not actually written by him, but once again has admirable ambition in its attempts to merge genres, but it just fails to hit the mark for various reasons.

Ironically, it is actually when In the Shadow of the Moon is at its most singularly genre based that it is at its best; the first quarter that is set in 1988 is very much a generic, but effective crime thriller. We have rainy streets, mysterious deaths, a moody soundtrack and two buddy cops who exchange some witty banter as they both (by coincidence) find themselves at the heart of an investigation involving three murders that are only linked by the fact that they all died the same way. Admittedly there is a little bit of contrivance here as to how our protagonist happens to be around these killings, as well as how he seems to instantly make the connection. However, everything is very well made, and so Lockhart’s pursuit of the serial killer is very enjoyable and watchable, and as we are not quite sure where the film is going, also very engaging and intriguing.

However, then when the narrative then turns to what happens nine years later, we then start to realise that In the Shadow of the Moon is (in typical Jim Mickle fashion) far more than just an average cop thriller. From here this is where the film starts to fall apart slightly, though its ambition is certainly admirable, the narrative starts to suffer from being repetitive, contrived and unnecessarily complicated.

Once the narrative gets to the third every-nine-year sequence some scenes involving Lockhart’s pursuit of the mysterious time travelling (not a spoiler) serial killer feel overlong and very samey, and at times a bit boring and too slow-paced. Meanwhile the exposition is at times a little too much, as this just unfortunately serves to highlight the film’s glaring contrivances and slight plot holes.

As the narrative develops and the film completely changes genre from crime thriller to light science fiction it just gets less interesting as it progresses, in terms of both our empathy with the film’s protagonist, but also our engagement with what is supposed to be the film’s main cautionary themes and ideas. As our protagonist (and also us the audience) are told by the serial killer that these people are killed for a particular reason, the film starts to feel like a rather patronising lecture about politics and humanity. At the same time the exposition that explains what is happening is not only over-explained, but seems to actually over complicate things. 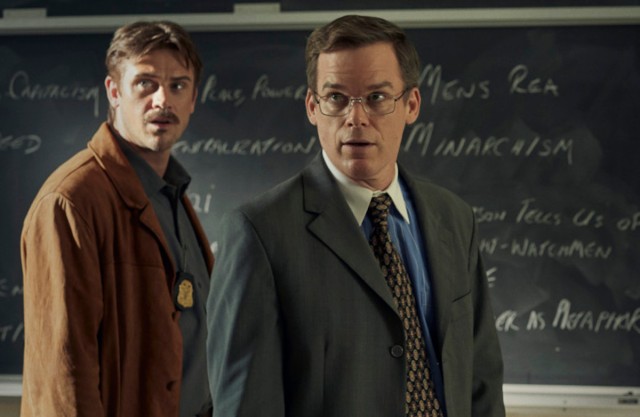 The casting may also not help; during the narrative the film’s protagonist goes through quite an arc, from confident and cocky cop to a deeply troubled and desperate loner. Though the script certainly doesn’t help, Boyd Holbrook lacks the range to make this complete transformation seem believable. His is perfectly cast for Lockhart’s initial character, as he is very likeable in that role, but as his character becomes increasingly troubled, he just doesn’t quite seem to quite have the range to pull this off to enable us to truly care about him.

Unfortunately, the film’s finale is very predictable and just feels like so many other recent mainstream science fiction films that end with a patronising lecture about the power of ideology and what it can potentially do. Though it is always good to see a film presenting its ideas and themes on its own terms, In the Shadow of the Moon just doesn’t quite have the substance or execution to back up its ambitions.

Though he only directs this time, In the Shadow of the Moon is the usual genre mash-up from Jim Mickle, but though its ambitions may be admirable to a certain extent, its execution produces a film that is watchable, but overall unsatisfying and forgettable.