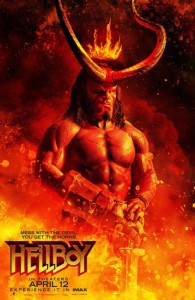 The survival of the human race hangs in the balance as a giant red creature (Harbour) that was summoned from hell back in 1944 by the Nazis must, with the help of a man who turns into a giant cheater (Daniel Dae Kim), a young girl who is also a medium that can puke out images of dead people (Sasha Lane) and Lovejoy (McShane), now stop an ancient sorceress (Jovovich), who with the help of a giant pig with a scouse accent (Stephen Graham) is intending to bring all kinds of random CGI demons and monsters back to the earth.

Yes, I admit that synopsis is perhaps a little facetious, but it actually does sum up the bizarre tone of this reboot that I do not recall being of particularly high demand. From the very start with Ian McShane’s voiceover in the film’s prologue being delivered in a supposedly ‘humorous’ way and the visuals providing a cacophony of limbs, blood and guts being severed all over the place we know we are not in for the standard comic book blockbuster; this Hellboy is a much more unashamedly violent affair that seems to embrace its incredibly silly story.

Though the initial premise may seem quite promising, and Neil Marshall has made some good films in the past (Dog Soldiers and The Descent proving he can handle comedy and horror very effectively), the main issue with Hellboy is that it is utter rubbish. While some of the more recent superhero outings that decided to embrace their silliness and non-sensical plots (Aquaman and Venom) did at least have some redeeming features and were quite good fun at times, but despite some decent performances, Hellboy just lacks the camp charm of those films.

It is quite obvious that Andrew Cosby’s script does not take itself seriously (though, how the hell could it?!?) and there are plenty of lines that demonstrate a self-awareness of how silly the plot is and plenty of profanities (there are many insults that characters shout at each other that feel like very British insults), but it is not good enough and so Hellboy is just nowhere near as much fun as it needs to be to get away with its outrageously silly and nonsensical plot. The script tries to encourage ‘banter’ between the characters but tries too hard and so any laughs produced are very much at the film!

Meanwhile Neil Marshall brings plenty of energy to the visuals, with constant (and often unnecessary) set-pieces with all kinds of random creatures, with severed limbs and blood everywhere, that certainly feels like this film is trying to cash-in on the success of Deadpool. However, with the plot moving so fast and very rarely offering any kind of explanation, the migraine inducing set pieces actually start to feel rather repetitive and boring. Hellboy is just about watchable with the brain switched completely off and is often unintentionally quote funny at times, but there is no escaping the fact that it is a very bad film. 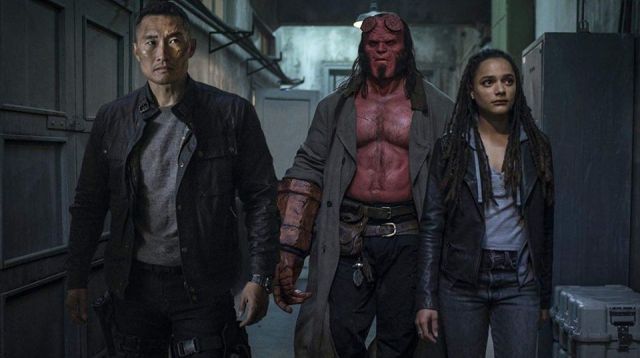 The main reason for me as to why Hellboy is such a disaster is that we are not given any characters to care about. Hellboy is a great protagonist with plenty of potential, and in the plot for this particular version his character is very conflicted, but the script or the plot never seem to even try to go into any details about his deep internal struggles and conflicts; he is a demon that defends humanity but yet humanity will only ever regard him as a demon and not ever as a hero, let alone accept him, and if he were to wield his true power he could potentially rule the world. That is quite a conundrum, but the script and plot just only rarely hint at this, before then making him fight a random creature like giants or a double-jointed witch. This is very much a waste, as one of the few things Hellboy does get right is the casting; before it was hard to imagine anyone topping Ron Pearlman, but David Harbour actually surpasses that and brings an added level of brooding masculinity and intensity to the role, it is just a shame that he is severely let down by the lacklustre and misfiring script. The rest of the performances vary; Ian McShane, Daniel Dae Kim and Stephen Graham enjoy themselves and it is obvious they are just there to pick up their respective cheques, while Sasha Lane gives an energetic performance that is wasted. As the film’s pantomime villain Milla Jovovich predictably just plays herself but looks quite bored doing it, which is basically the only thing within the film that the audience will actually be able to empathise with!

A total misfiring mess of a film; with the exception of its casting, Hellboy tries very hard to be several things and fails rather spectacularly at all of them. A reboot never needed rebooting quite so quickly!