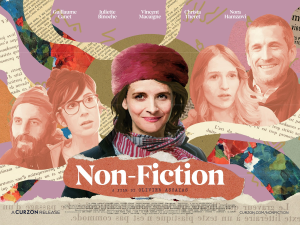 Alain (Canet) runs a publishing house and is married to Selena (Binoche), an actress who stars in a very popular TV series. Alain’s publishing house publishes the books of his friend Léonard (Macaigne), who is married to Valérie (Nora Hamzawi) but has been having an affair with Selena for years. Léonard’s latest book is based on his numerous affairs (with the names and a few facts changed) and Selena is concerned that Alain will find out about her affair with Léonard. Selena is also concerned that Alain is also having an affair, which he indeed is with a woman working at his firm (Christa Théret) who is in charge of adapting his publishing firm for the digital age. As the two Parisian bourgeois couples meet up to drink wine and discuss politics and art, their various relationships with one another become strained.

If that synopsis sounds a little complicated, then a briefer summery would be; some Parisian bourgeois couples drink a lot of wine, have vacuous discussions about art and politics, and also sleep with each other hoping that the others will not find out.

To describe Olivier Assayas’ latest almost play-like film as an acquired taste would certainly be an understatement; there is no denying that some will find it to be an engrossing and intellectually stimulating comedy of manners about modern art and society with a Luis Buñuel-like venomous commentary on the absurdity of the middle classes. While others will just find it to be dull, self-indulgent claptrap that is as unlikeable, smug and just as vacuous as its characters. Ultimately it may well be a film where the viewer will get out of it what they want to look for, and maybe that proves it to actually be a very clever film? Then, if the viewer looks hard enough, it is always very possible to find something that is not there at all! That is probably a (lengthy) discussion for another day that could easily produce some kind of dissertation level analysis of the whole medium of film.

Anyway, though me giving a 6/10 to a film that I have described as an acquired taste may seem like a contradiction, in my defence there will undoubtedly be many that love Non-Fiction (88% on rotten tomatoes at time of writing) and many that will absolutely hate it. As per my rating, I am very much in the middle and would argue that Non-Fiction is a perfectly watchable film with some enjoyable moments, but it is certainly also a film that ultimately is just as vacuous as its characters, and even more forgettable.

The original French title of Double Lives is certainly more appropriate to the plot and its characters, but it does feel that the film’s title is not the only thing lost in translation, as though the film does have some amusing moments (a discussion concerning Michael Haneke’s The White Ribbon being a particular highlight), it cannot help but feel that a lot of the supposed comedy does get lost in translation. Even in the English subtitles, Assayas’ script is very sharp and certainly quick, with plenty of subtext not only in the words the characters say, but also how they say it. Sentences that may sound like compliments in isolation are actually very much clearly intended to be sly insults and put-downs within the context of the conversation or by how they are said. Likewise, when the characters (frequently) debate art and politics they all seem to intentional disagree with and contradict each other, sometimes for the sake of it, proving any potential theory that characters like this that are supposed to be cultured and educated are in some ways the most narrow minded and uninteresting. The characters will often have conversations that essentially turn into competitions fuelled by their individual egos and arrogance. Non-Fiction is a very dialogue heavy film, and though each scene in the film’s quite episodic and play-like narrative may be quite intriguing, they can be quite exhausting at times as they do tend to go nowhere and are quite repetitive.

Though the characters themselves have some aspects of their lives that some of us may envy, they are very much characters with very few redeeming features, and they are therefore very difficult to care about or like. Unlikeable characters can be fine as long as they have some genuinely interesting qualities, but due to the fact these characters have a tendency to talk completely out of their arse, they do not even have that quality. It is therefore quite an ask for the audience to be expected to spend just under 110 minutes with them. It does often feel like Assayas’ script is just constantly mocking the characters that then deliver the dialogue, and we the audience are participating in this mocking, and that certainly does help to make the film that bit more watchable as it does almost feel like we are goading them on and truly testing the limits of their obnoxiousness and extreme egotism. 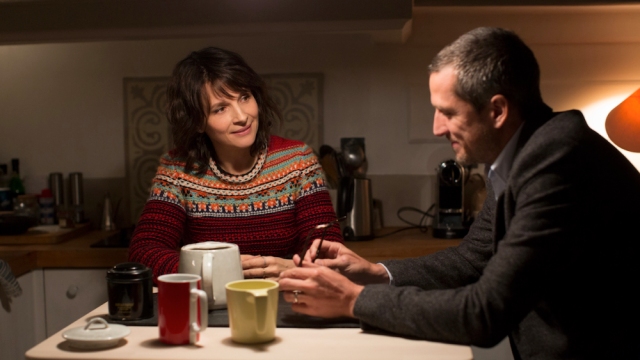 The performances are all very good, and they certainly do help to make both the script and characters that little bit more engaging, and therefore the film itself watchable. The main standout of the cast is Nora Hamzawi’s Valérie, as not only is her character the one with the most integrity, but her performance most definitely evokes some of the desperation her character feels. Most of her anguish is brought on by her marriage to the hapless Léonard, and she is also the one character with the most satisfying individual character arc – though admittedly some of them do not have arcs, and this may well also be part of the point. Though Non-Fiction has some qualities, its overwhelming and inescapable sense of self-aware smugness (an unfunny joke near the end where the character played by Juliette Binoche jokes about the actual Juliette Binoche truly takes the biscuit!) is just way too much for it to leave any kind of lasting impression apart from a slightly bitter taste in the mouth.

A film that will inevitably be highly praised and completely loathed in equal measure; Non-Fiction may have some redeeming qualities and be an occasionally amusing viewing experience, but it has nowhere enough genuine substance to be anything more than that.