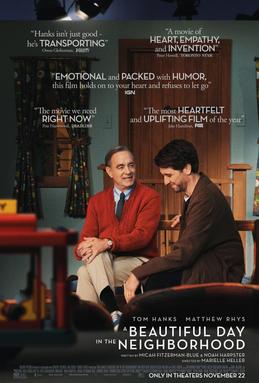 Investigative journalist Lloyd Vogel (Rhys) is given an assignment to interview and write a profile piece on legendary children’s TV presenter Fred Rogers (Hanks). The naturally cynical Vogel is very sceptical regarding Rogers’ good nature, but as the two of them get to know each other Rogers’ natural empathy, kindness and decency soon help Vogel to change his outlook on life and deal with his own painful past.

‘Heart-warming’, ‘uplifting’ and even ‘life-affirming’ are quotes often used in a film’s marketing, and it is of course obvious why, but while this often translates as ‘middle of the road, predictable, mawkish, crowd-pleasing drivel’ sometimes it actually does not do that said film proper justice. A Beautiful Day in the Neighbourhood (english spelling) is in my opinion such a film, as it is a film with much more genuine substance than your average film that is given those potentially off-putting labels.

There is no denying that A Beautiful Day in the Neighbourhood follows an incredibly familiar narrative trajectory, but what is crucial is how it gets there, and thanks to some exceptional performances and a very strong script it is a deeply engaging and inclusive story that manages to purposefully (but also skilfully) not just be about the characters involved, but also encompass much broader themes that apply to every single one of us in one form or another.

It would have been so easy for the screenwriters to fall into the trap of making Matthew Rhys’ Lloyd Vogel a walking cliché, but thanks to a script that goes much further than this and an excellent performance from Rhys we not only empathise with his character, but the film manages to speak to the audience via him in what is very much an experience that encourages us to undertake some self-reflection about our experiences and how these may have shaped our own outlook on life. The film tells us enough about Lloyd to understand the reason for his ideologies, and Rhys skilfully captures just though the look in his eyes and his body language his character’s inner torment and the deep routed cynicism he has towards people.

The film’s more subtle approach is what ultimately makes it more rewarding; instead of having exposition rammed down our throat Noah Harpster and Micah Fitzerman-Blue’s script keeps things a lot more minimal and respects the audience’s intelligence by letting us fill in some of the gaps regarding Lloyd’s life. Though the overall path of the narrative may not surprise anyone, what also helps is that the filmmakers like to mix things up by structuring the film as a fictional episode of Mr Rogers’ Neighbourhood, which works very effectively at not only providing us with a refreshing and unique way of telling the story, but serves as a fitting tribute to both what Fred Rogers represented as well as the cultural impact that he and his show had on those at the time. 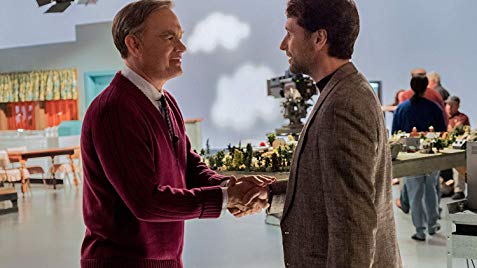 As Fred Rogers, Tom Hanks excels in a role it feels that he was born to play. Admittedly the character of Fred Rogers and everyone’s general perception of Tom Hanks the actor are very similar, but that should take nothing away from cuddly Tom’s superbly nuanced and gentle performance in which he effortlessly brings to the screen a character whose softly spoken simple words will have a profound effect on all viewers. This is achieved not only through Fred’s interactions with Lloyd, but also when he is looking straight at the camera presenting the fictional episode that frames the overall narrative. This enhances the inclusive nature of the narrative as we cannot help but listen to his seemingly simple but deeply effective words and apply them to our own unique personal experiences that have also shaped who we are. The film openly accepts that both protagonists have their flaws and does certainly try to stay grounded in reality in this regard, and indeed acceptance and forgiveness are two of the film’s main themes as makes it quite clear that life will always have its more challenging moments, and it is how we deal with these challenges that ultimately helps to define us. Though it does not all work so well; some narrative developments are perhaps a little too neat and tidy, while it is quite evident why they are used, some slightly surreal dream sequences don’t quite fit with the narrative’s overall tone.

However, overall A Beautiful Day in the Neighbourhood is proof that in cinema less can indeed be more, in delivering quite seemingly simple messages within its narrative it is a deeply touching and engaging exploration of forgiveness and acceptance that will move viewers of all ages.

A film that is a very inclusive and self-reflective experience in how it deals with its very relatable themes; A Beautiful Day in the Neighbourhood is proof of cinema’s powerful ability to touch the hearts of all viewers.

An extremely passionate and (semi) opened minded film reviewer, with a hint of snobbish.
View all posts by MoodyB →
This entry was posted in All Film Reviews, BAFTAS 2020, Oscars 2020, The Best of 2020, Uncategorized and tagged Chris Cooper, entertainment, film, film review, Matthew Rhys, tom hanks. Bookmark the permalink.