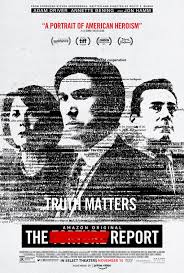 Adam Jones (Driver), a young and idealistic FBI Agent is tasked by his boss (Bening) to lead an investigation into the CIA’s post 9/11 Detention and Interrogation Program and how they dealt with potential terror suspects. However, as he digs deeper and makes some shocking discoveries, certain powerful figures within the CIA and US Government try to stop his report from ever being released.

With three (very different) films coming out over the next month or so in which he is one of main characters, Adam Driver certainly is one of the men of the moment. While most people will of course be eagerly awaiting what does happen to Kylo Ren, we are first given a far more grounded and familiar setting of claustrophobic basement offices for The Report. Though the protagonist of Adam Jones is certainly not without the usual clichés of this type of drama, Driver is as effortlessly watchable as we have now come to expect, and gives a very committed performance that makes us believe in and also empathise with his character as he goes on an increasingly relentless pursuit of making sure the truth is revealed. In what is a very dialogue-heavy film, Driver’s character does give us the grounding to keep everything together and make the inevitable genre clichés and slightly generic nature of the film that more forgivable.

Indeed, there is no denying that The Report is a very much a slow-burn, dialogue heavy thriller that does require the audience to pay attention and also demonstrate a certain amount of initial patience. We are first introduced to a plethora of characters (many of which are played by famous faces in what is quite an impressive cast line up) all having quite jargon-heavy conversations while sitting behind desks of various sizes and sitting on chairs with varying levels of comfort (a general rule being the more important the character – the bigger their desk and the more comfortable their chair).

What does help to keep the story interesting and engaging is that it actually has flashbacks showing things that have happened instead of just having the current characters talking about them. This does break the narrative up nicely and helps to maintain a better pace of what is already a fairly steady pace, some of these flashbacks are just more scenes of people in suits moralizing, but there are also some brutal scenes involving torture. This is never overdone, and these scenes are never just included for the sake of it but work very well as a reminder of just how shocking and barbaric some of these tactics that were used actually were.

As the story progresses and even more characters are introduced there is very much a quiet sense of tension that builds up throughout the narrative as Jones’ findings start to ruffle the feathers of a few senior figures and he faces not only strong opposition and challenges to what he is doing, but also risks going to prison. Driver’s seemingly natural ability to make us believe in any character he plays helps keep things together, while the confined settings of basement offices do certainly add to the claustrophobic feeling of the narrative. 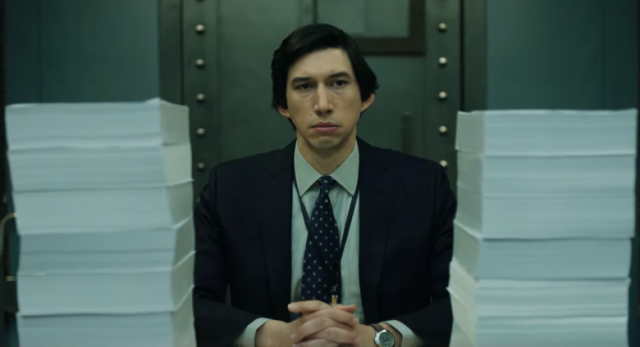 The rest of the cast of big names all do fine jobs in their respective roles. They are admittedly not the most challenging roles that these actors will ever play, and some of them are merely just cameos consisting of one or two scenes. This is not a film where there we are given fleshed-out characters with detailed backstories, but they are all given substantially meaty dialogue and narrative defining moments that have to be delivered with conviction by the characters to be able to work, and they certainly all deliver. Likewise, the film makes an admirable attempt to keep things as factual as possible, with every main character given the chance to justify their individual ideologies and opinions.

There is admittedly very little in the narrative of The Report that will come as a much of a surprise to most of the kind of people that will see it, and this is one of the main reasons it may not particularly live long in the memory once finished. Likewise, the film asks some bigger questions about the arguable hypocrisy of Western Governments which could never be answered in a film. However, for the two hours that it is on for, for those willing to invest their initial patience and attention will be rewarded to by a thriller that may never be quite edge of the seat stuff but is certainly never anything less than watchable and engrossing.

Though initially quite heavy going and dialogue-heavy, thanks to a superb leading performance from Adam Driver, The Report quite quickly finds its feet to emerge as a very competently made and engrossing slow-burn thriller.