In 1862 scientist James Glaisher (Redmayne) enlists the help of pilot Amelia Wren (Jones) to mount a balloon expedition that will not only take them higher than has been ever done before, but also allow him to take readings that can prove his theories regarding weather prediction. However, their increasingly perilous ascent becomes a fight for survival that leads to them both learning things about each other and themselves.

Many actors have a fear of being typecast and so try to pick roles that prevent that from happening (if they are given the choice), but in recent years Eddie Redmayne seems to be quite embracing it. While enjoying the undoubted large payment he gets from starring in the Fantastic Beasts films, he seems to just now be happy to play nice characters in nice, crowd-pleasing films and stay very firmly in the middle of the road with his film choices. Admittedly, anyone who remembers his pantomime level impression of Ming the Merciless in Jupiter Ascending may consider that very wise!

It is therefore no surprise that The Aeronauts is yet another whimsical, unchallenging crowd-pleaser in which Redmayne plays a thoroughly decent (but not especially complex) character that is perfectly likeable but not especially memorable.

This is more down to the script, as The Aeronauts can’t quite seem to figure out what it wants to be truly about, and so we have four different potential storylines all working against each other and not a single one truly getting enough focus to be as engaging as they should be; there is Glacier’s backstory and determination to uncover world changing information regarding weather prediction, the feat of breaking the world record for taking a hot air balloon higher than ever before (though it is unclear who – if anyone – actually cares about this record), Amelia’s attempts to finally deal with the tragic death of her husband or is it just a straight forward against-the-odds survival story?

This is a shame, as they could all have produced a great film if given the time and focus required, as though I am not familiar with the character of James Glaisher, there is enough in the film to suggest he was very much an interesting character who was a true pioneer with an intriging story of his own. Due to the lack of depth given to the character of Glaisher, the film’s flashbacks involving him just feel like unnecessary filler instead of genuinely interesting character development – as does the clunky and predictable trope of Amelia agreeing to join him, changing her mind and then suddenly agreeing to it at the last minute (which is not a spoiler to anyone who has seen any film ever made). 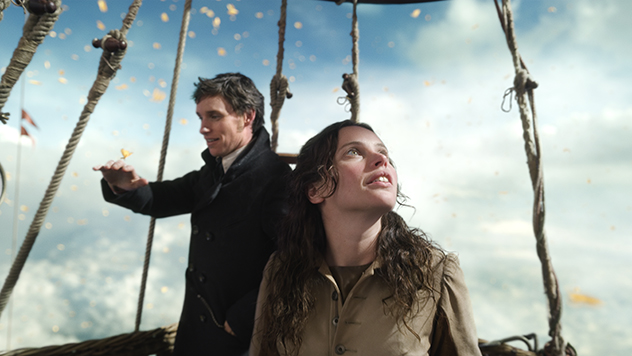 Felicity Jones’ character of Amelia Wren does admittedly have a more developed arc. There have been many arguments for and against the inclusion of her fictional character (that does apparently draw inspiration from some real female characters from that time) and not the actual other male character that went up in the balloon with Glaisher. Well, that’s not for me to get involved in, all I care about what it is in the film and if it works, and Wren’s character is definitely the far more interesting of the two. As would be expected, Jones also gives an energetic and committed performance, bringing more emotional depth to her character than the slightly clichéd script does, but once again it does sadly feel that the script could have just done more and gone further to make her character’s journey even more cathartic.

The Aeronauts does however work best as a very simple survival story of two people vs the elements. Though the lack of character development does stop the film from truly justifying why the hell the two of them would embark on such a potentially fatal expedition, there is no denying that some of the action sequences are gripping and very well put together – making for a truly cinematic viewing experience. I cannot think of many films where the focus of the action is inside (and outside) a hot air balloon, and speaking as someone who hates flying because of the helplessness and lack and control, while also not being too keen on heights, I must admit that the film did truly capture the height at which most of the film takes place and the unique peril that provides. As the protagonists ascend and this brings the added perils expected, there are still plenty of the usual expected slightly predictable clichés and contrivances, but there is no denying that the visuals keep things genuinely gripping until the very end.

Though it may be lacking in genuine substance or true character development, and so overall be quite a forgettable film, The Aeronauts is definitely an experience that deserves to be seen at the cinema just because of its spectacular visuals and set pieces.