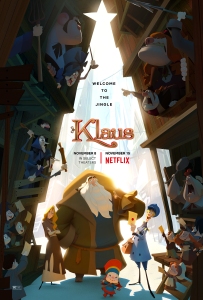 After proving himself to be the worst postman at the academy, as punishment Jesper (Schwartzman) is sent to be the postman for the remote island of Smeerensburg where the local population consists of two feuding groups that have been fighting each other for as long as anyone can remember. However, after a chance encounter with a boy who he delivers a letter for and a mysterious toy-making carpenter called Klaus (Simmons) who then makes Jesper deliver a toy to this boy, word spreads and soon they start delivering toys to all of the children of Smeerensburg in exchange for letters. Not only do they bring joy back to a currently joyless town, but their actions would soon start something that will become much, much bigger

Though Netflix released this festive animated film on 15 November, I thought it best to leave it until nearer Christmas to watch it. The other day I finally decided that it was a good time to try and get in the festive mood and watch what could easily be just another middle of the road Christmas film that comes with the expected saccharine schmaltz. However, I am very much glad I did take the time to watch Klaus, as it is one of the best Christmas films of recent times as well as being a very good film in its own right.

Klaus manages to have all the usual themes you would expect from a good Christmas film (well, any animated film) such as the importance of kindness and tolerance to one-another; one of the repeated lines in the film is “a true selfless act always sparks another”, and learning this is part of the character arc of the film’s protagonist. There are certainly a fair few clichés along the way, and some slightly more formulaic elements of the narrative, such as the fact that there has to be an antagonist to try and thwart the protagonist, as well as the actual character arc of the protagonist himself.

However, this is all perfectly forgivable as Klaus is not only a film that is made with the very best of intentions, but also one that does put a spin on the origin story of one the key elements of Christmas that manages to be both playful, but also emotionally engaging and truly capture what Christmas in its most innocent and purest form should represent. Yes, there is of course the element of cheesiness and narrative predictability, but thanks to its great script Klaus manages to skilfully elevate itself above the abundance of cynically schmaltzy and saccharine Christmas films that seem to be released every year to emerge as something far more memorable and genuinely emotional.

Though Klaus is a cartoon, there is certainly the possibility that it may provide more appeal to adult viewers than it will children; the humour and the themes involved are dealt with in an appropriate subtlety that is never shoved down the throat of the viewer (and hence they end up being far more effective and powerful). There is very much a nostalgic element to the film that reminds us adults of the unique magic of Christmas that we experienced as children that we so dearly wish we could have once again, but unfortunately the experience of having to grow up in the real world has left us very cynical, and can easily lead us forgetting the very fundamentals of what Christmas is supposed to represent. There are also the broader themes involving tolerance and respect for others, and these are also dealt with suitable subtlety.

In this day and age of the likes of Pixar and Dreamworks having unlimited budgets to make animated films as realistic and as detailed as possible, Klaus is also a timely reminder that there is still a place for other types of animation, and the more old-fashioned style of animation of the film not only further adds to the film’s nostalgic feeling, but also looks stunning and fits perfectly with the story. The fact is that the most important element of any animated film is how good the story is, and the great script and story that Klaus has would always shine through irrespective of any limitations of the animation.

As the story develops, the film never loses focus and maintains its very core themes, but also deals with the main elements associated with the Father Christmas / Santa Clause character in some very playful and creative ways. Though there are inevitably some more clichéd moments that come from the film having to conform to certain narrative rules, but they very rarely undermine what is a genuinely heart-warming movie that will appeal to children and adults alike.

Finally, we have a good Christmas movie! Klaus re-tells the origins of one of the most famous elements of Christmas and in doing so is a deeply engaging and moving experience that truly captures the spirit of Christmas.