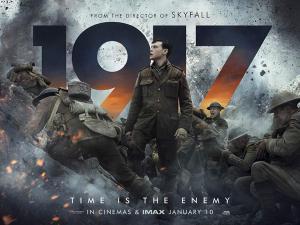 During World War I two British soldiers are given a seemingly impossible mission: cross deep into enemy territory to deliver a message that will stop an attack that is actually a trap, and save 1600 lives – including one of the soldier’s own brother.

For those of us that have never had to be involved in war (like myself) it is surely impossible to truly empathise with those that did and the extreme, almost indescribable horrors that they must experience, and the undeniable fact is that even those that return from war do not return as the same person that left. So, any film about that subject matter always takes a risk of trivialising and glorifying that aspect of war and the fact that in reality there are no real winners. It does seem obvious that Sam Mendes genuinely wants to avoid that trap in 1917, and in a story that is apparently inspired by a true story that he was told by his grandfather that served in the First World War. It has to be said that he predominantly succeeds in doing this in a film that is certainly not without its flaws, but is overall a very raw, visceral, thrilling, compelling but also ultimately appropriately sobering and sombre, experience.

A lot has been made about the film’s ‘single-take’ approach, and there is no denying that such a technique does risk becoming a cheap gimmick if not dealt with appropriately. However, I would argue that Mendes does deal with this respectfully and appropriately, as the long-take approach can be very effective at capturing the various moods and feelings when done properly, just like in Steve McQueen’s films. The film certainly never claims to be in ‘real-time’, and it is common knowledge that it was not actually shot in one literal take, but a series of 10 minute scenes that are put together extremely well to give a predominantly seamless ‘one-take’ feeling.

This stylistic approach provides a deeply effective way of allowing the audience to share the journey of the main characters (as much as we can from the safety of not being in an actual warzone), we not only just learn things as the characters do, but whereas some films may cut between the journey made by the characters where very little actually happens, we make that journey with them, and as they do make their extremely dangerous journey into the unknown, this actually provides far more genuine tension.

This approach also allows 1917 to depict the extreme horrors and tragedy of war in a much more nuanced and sombre way than other films may do; our characters slowly explore muddy former battlefields laden with rotting corpses of humans and animals. This in my opinion is far more effective than showing endless battle scenes, instead we are shown the aftermath of the battle scenes. Our characters do not want to look at what is around them and be reminded of all the extreme tragedy, and neither do we, but our protagonists have to walk through it, and therefore so does the viewer. However, the film skilfully avoids patronising the viewer by just upping the visual tragedy to ridiculous levels – something that would have ultimately undermined the film.

1917 also pays fitting tribute to the tragedy of war in its more subtle moments, which are often casual conversations between characters; such as where one explains that he exchanged his ‘bit of tin’ medal for bravery at the battle of the Somme for a bottle of wine because he was thirsty, when one discusses a time when they were able to go home and genuinely wished that he didn’t actually go home or where one character states that though they may not be attacking today, this is just merely putting off an inevitable future order to attack. The one-take approach does allow for these moments to be included in a more underplayed and subtle (and therefore more powerful) manor.

1917 also includes some incredibly thrilling action sequences of incredible tension, and this tension is only increased by the film’s visual approach, making these sequences raw and deeply visceral – one particular standout is a scene involving a crashing aeroplane where the misconception of something seeming far away is very effectively depicted. Likewise, scenes where characters are trying to run through crowded trenches genuinely capture the claustrophobia and chaos of these trenches. 1917 is also visually stunning; Roger Deakins’ cinematography is (as always) incredible, while the sound and production design is completely immersive. Likewise Sam Mendes’ usual composer of choice Thomas Newman delivers a stunning (but crucially not overbearing) score – though the most powerful musical moment of the film actually features diegetic music in which in one of the film’s most powerful scenes soldiers peacefully sit down listening to another soldier sing before going into a battle.

A narrative of this nature is naturally going to have a few contrivances in which things seem to happen or characters turn up solely at the narrative’s convenience (or indeed inconvenience), however some of these do feel a little bit too contrived or convenient for their own good. Likewise, we do sometimes get unnecessary exposition dialogue in which characters explain what the camera is basically showing. Many have described 1917 as just being like a computer game, and though I understand these comparisons, they do kind of miss the point slightly. 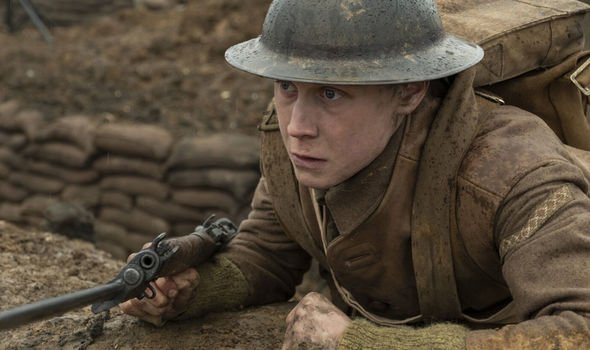 Though 1917 does skilfully make sure the one-shot technique does not feel like a cheap gimmick, the decision to cast famous faces as characters that turn up to say a few lines may well be great for a trailer or the marketing, but does in some ways feel like a slightly cheap marketing gimmick. On the subject of acting, a lot of the success of 1917 does inevitably depend on great leading performances, and George MacKay and Dean-Charles Chapman deliver incredible performances that give us two characters to truly care about and believe in. It truly is a depressing fact of how the film industry works that if it were a Hollywood megastar playing George MacKay’s character, they would be getting a plethora of awards nominations. I certainly understand why they avoided casting a megastar, as that would make the film all about them, and they would be all over the marketing with their name in bigger font than that of the film’s title. In terms of the physical commitment, MacKay’s performance is on a par with Leonardo DiCaprio’s in The Revenant (in what is also a very similar film in terms of its visual and technical approach – more so in my view than the superior Dunkirk), but MacKay’s performance gives even more than that; just in his eyes he depicts so brilliantly a very young man who has seen indescribable horrors, and it truly is a shame that he is not getting any awards nominations.

1917 is a film of genuine raw power that has nothing but the utmost respect for its subject matter that truly grips from start to finish all the way until its tonally appropriate, deeply haunting and almost dreamlike final scene.

Though it has a few minor flaws, 1917 is not only a visually stunning and technically astounding piece of cinema, it is also a tonally appropriate film that pays deep respect to its subject matter, and because of this is a gripping and deeply haunting experience.