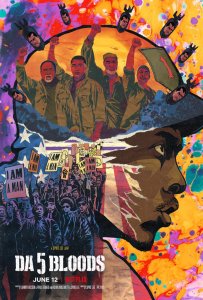 Four African American Vietnam vets return to Vietnam to seek the remains of their fallen squad leader and also find the gold fortune he helped them hide. However, in doing so they must battle man, nature and the ghosts of their pasts.

There is certainly no denying that Spike Lee is one of the most important filmmakers of the last few decades, even though he does have a tendency in my view to sometimes ram his own undeniably passionate, fierce and important views and opinions down the throat of the viewer a little too much, which can lead to quite a patronising, alienating and infuriating viewing experience. However, when he is on top form he does manage to successfully incorporate these into a film that is also both inclusive and entertaining, and for those films set in the past he does skilfully also make them feel topical and current. The excellent BlacKkKlansman was certainly a film that demonstrated all of these qualities, but sadly, despite certainly having the initial potential, Da 5 Bloods is not at the same level, and is unfortunately not up there with the best of Lee’s distinguished filmography.

It is very often the case in films that less can indeed be more, and perhaps Lee should have remembered this, as Da 5 Bloods tries to be too many things and take on too many themes, and so in the end becomes an unsatisfying bloated mess of a film. This is a shame, as there is no denying that Da 5 Bloods does take on some very pertinent themes; there is not only the deep and long term psychological effects of being involved in conflict, but also both the overall questioning of the morality and legitimacy of the Vietnam war, as well as telling this from the perspective of African Americans that fought in it. I have no personal experience of any of these things, but film is certainly a very effective way of at least helping a layman like myself have some kind of understanding. Likewise, Spike Lee uses this to then provide some historical grounding by not only showing us how badly African Americans that fought in Vietnam were treated, but also their treatment in American society in general of both the past and the present.

Though there is a lot that has been seen before that will not particularly inform anyone familiar with Lee’s films (or indeed current affairs) of anything that they are not aware of already, there is undoubtedly a reason why filmmakers like Spike Lee do feel the need to repeat themselves – however that is a discussion I will leave to others. However, these parts are all put together with the fierce passion and integrity that we have all come to expect from Spike Lee and provide the foundations for what should be another great and deeply allegorical film.

Things do also start off quite well, as thanks to the performances the four main characters that we are introduced to are all very much convincing and believable as four individuals that have a long history and have been through a lot together – Delroy Lindo is a particular standout with a fiercely committed performance. The film is also visually stunning, with different ratios used for the different time settings feeling more than just a lazy gimmick, while Newton Thomas Sigel’s cinematography is superb.

However, despite all of this initial promise, thanks to various increasingly bad and misguided narrative decisions Da 5 Bloods just descends into an overall unsatisfying film. it is quite frankly baffling why Spike Lee and his screenwriters made some of the decisions they did with regards to the narrative. At over 150 minutes Da 5 Bloods shows a very disappointing level of ill-discipline that would not be expected from an experienced filmmaker like Spike Lee, who does usually admittedly get straight to the point. However, maybe that is the problem as he tries to make too many political points, while also trying to make Da 5 Bloods an action epic, as well as being allegorical.

There are quite simply way too many subplots and a fair few scenes that add nothing to the overall main themes of the film (well, I assume they are the main themes, as the film tries to take on so many!), while the dialogue in some scenes is just over written and adds nothing of any substance either in terms of what the film is trying to say or the development of the main characters, who themselves can sometimes be very difficult to like. There are also additional characters such as a local tour guide, a team of bomb disposal volunteers, local gunmen for hire and Jean Reno’s shady French businessman, and the narrative’s casual treatment of them and just how disposal they are demonstrates some very poor and lazy screenwriting. There are not only some seriously glaring contrivances involving these additional characters, but also once the gold is discovered (how it is actually found is quite ridiculous) what happens within the overall narrative, which is a combination of lazy, predictable and contrived. Likewise the score from Spike Lee’s regular composer Terence Blanchard, though musically very well put together, does not fit at all with what is actually happening on screen, and so only serves to make the whole experience even more alienating and uninvolving.

As the story goes on the developments get more and more ridiculous and lazy, in particular the film’s conclusion. This does all threaten to undermine the undeniably serious and important issues that the film does raise, but their importance does shine through and make sure that Da 5 Bloods is overall just about watchable, but unfortunately the actual film itself will not live long in the memory. However, there appears to be an element of complacency (and possibly arrogance) demonstrated by Spike Lee in that just because he is taking on some undeniably very important historical and contemporary issues, he can just do whatever he wants with the actual narrative. Well, that is not only a sever case of misjudgement on his part, but it also completely ruins what could have been a great film.

While Da 5 Bloods deals with some undeniably important issues both past and present, this is let down by a bloated and ill-disciplined narrative littered with lazy contrivances, and so ultimately produces a very unsatisfying and forgettable film.