During what seems to be a standard flight from Berlin to Paris a group of terrorists take over the plane and try to break into the cockpit, and now co-pilot Tobias Ellis (Gordon-Levitt) must singlehandedly maintain control of his plane and land it safely, but while having absolutely no control over what is happening the other side of the cockpit door.

As a visual medium, cinema can of course transport us to expansive, epic and visually stunning places, but in the same way it can capture very effectively the extreme claustrophobia of tight, enclosed settings. A few years ago I did my top 10 films ‘Films set in One Location’ (for anyone interested in that click here) and the approach that director Patrick Vollrath goes for with 7500 is most certainly very reminiscent of the likes of Das Boot, Locke, Buried or Lebanon to name but a few. With the exception of the opening sequence (which is purely airport CCTV footage of the antagonists walking around the airport before they board the plane) the only setting during the narrative’s entire 92 minutes as the actual cockpit of the aeroplane, and this proves to be extremely effective in what is an often genuinely tense thriller.

However, our protagonist is not someone who will be able to provide inexplicable heroics and take all the bad guys on himself, Vollrath has thankfully opted for an approach more reminiscent of United 93 in providing us with a much more visceral experience that places the audience very much at the centre of the action, and it is of course an extremely unpleasant place to be. We spend the first 15 or so minutes by simply watching the crew carry out all of their usual pre-flight procedures and share the usual pleasantries / light banter – as we the audience know that something bad is going to happen at some point (the title is indeed the code used for such ‘unlawful interferences’) this does make watching these characters that are oblivious to the inevitable turn of events quite unnerving viewing. Our protagonist is an every man caught in the wrong place at the wrong time having to rely solely on instinct, while at the same time remembering and diligently following the various procedures he has been taught but hoped he would never to follow or use. Though 7500 is inevitably more about cinematic technique than actual character development, the opening exchanges do provide some development for Tobias, which does add genuine jeopardy and conflict for him later in the film.

The narrative takes place in almost real time (though not quite) and the decision for everything to solely remain within the cockpit proves extremely effective, as Tobias can certainly hear various distressing noises from outside the cockpit, but like him we the audience only have access to what can be seen from the camera directly outside the cockpit door. It is of course one of the fundamental laws of cinema that we always fear more what we cannot see, and as we have to fill in the blanks in terms of what may be occurring in the rest of the plane this only serves to heighten the tension. This also adds to us sharing the feeling of helplessness that Tobias experiences – he is constantly being reminded that he should under no circumstances open the cockpit door. This is of course obvious in theory, but the film does very successfully portray situations where Tobias faces understandable extreme conflict regarding this, and there are times when he is faced to decide between two impossible choices.

With the camera constantly focussed on the face of our protagonist at close-up range it of course goes without saying that a great leading performance is crucial for 7500 to work, and as Tobias Gordon-Levitt certainly delivers. His constant sweating and deep, panicky breathes as he is continuously faced with split second decisions to make in what is a horrific situation can be felt throughout the film – and Gordon-Levitt provides a very raw and physical, but also suitably nuanced performance that captures the extreme internal conflict and panic that his character experiences. Likewise the camerawork not only depicts very well some of the feelings of helplessness experienced by our protagonist, but also the extremely claustrophobic environment in terms of both the visuals and the sound – the film’s only soundtrack is the diegetic constant, ambient noises of the cockpit, and this also proves very effective. 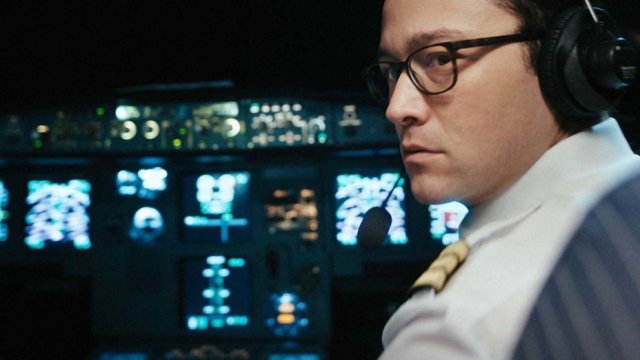 Of course, for a film like this one of its ultimate challenges is how to maintain tension and a certain level of plausibility for an entire feature length running time all the way until the end, and unfortunately Vollrath and his co-writer Senad Halilbasic fail to maintain the same standard in the film’s second half. There is an increasing reliance on cliché and contrivance, which does make some elements of the story a little too predictable or convenient, and it does ultimately remove a fair bit of the genuine tension that was produced in the first half. Likewise, some of the prolonged silences start to feel like filler, more than moments that actually increase any kind of tension. The film is also a little over-edited; for a film that takes place in a confined setting there are lot of constant edits (especially in the second half), and so longer takes may have added genuine tension.

However, though its second half can not quite match the standards set by its first, 7500 is still a film with plenty of moments of genuine tension thanks to some very effective filmmaking techniques and an excellent central performance, and it does have enough to maintain a certain level of tension and intrigue until the end.

Though a slightly lacklustre second half means it fails to reach the heights of the first, thanks to some very effective storytelling techniques and a superb leading performance, 7500 is a decent and occasionally taut and engaging thriller.