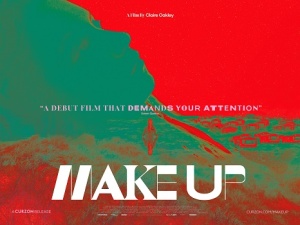 Reserved teenager Ruth (Windsor) comes to stay at a Cornish caravan park during the winter-off season to be with her boyfriend Tom (Quinn) who works there. However, after she suspects Tom of cheating on her, her obsessions lead her to be drawn into a mysterious place where it becomes increasingly difficult for Ruth to know what is in her imagination and what is reality.

Though Make Up may well be quite literally a low budget British film, to call it that feels like it does this film a total (and actually quite insulting) disservice, as it is a wonderfully immersive cinematic experience from start to finish that deserves to be seen on the big screen, and is perfect proof that budget is not necessarily a hurdle to stop a filmmaker from realising their vision. Writer / Director Claire Oakley creates very skilfully and effectively a film that not only manages to successfully merge genres, but also one that seems to clearly create the exact vision and atmosphere that she intends. The result of all of this is a stunningly unique and unforgettable film that contains a deeply intoxicating and seductive atmosphere that gets well and truly under the viewer’s skin.

The story to Make Up starts simple enough, but as it goes on the film skilfully keeps it cards very closely to its chest and it certainly provides plenty of questions, but not necessarily any straightforward answers, or indeed any at all, and is all the more engaging for it.

With Summerland and Hope Gap also released in cinemas, there has certainly been some perfect examples of the cinematic and emotionally evocative nature of England’s coastline. However, while those film’s utilised the spectacular nature of what our coastline can look like when drenched in sunshine, Oakley opts for the other end of the spectrum by setting Make Up in the autumn/ winter months, which is characterised by the howling wind blowing through an empty and desolate campsite, and the strong waves makes the sea an area of potential danger that is to be respected and avoided – one of the key aspects of our protagonist’s arc is that she cannot swim. Of course, both the wind and the waves make plenty of evocative noises, and these stir up the various (and often confused) emotions in our protagonist.

Appearing in every scene, the story is told completely from the point of view of Ruth and what enters her seemingly quite troubled mind. This certainly creates an element of unreliability in the storytelling, but also unpredictability, as we the viewer can never be quite on terms with what it is happening within the narrative – which is only a good thing, as we the viewer (just like our troubled protagonist) cannot quite distinguish between what is reality and what is not. This enables Oakley to skilfully and very effectively merge genres, and create a unique atmosphere for the film that often involves psychological horror – this is often depicted through an effective use of visual montage that depicts the protagonist’s mindset. The desolate caravan park and the howling wind that is a result of its exposed coastal location makes the labyrinthine and almost ghost-like nature of the layout of the caravans very much a character in its own right and one that certainly adds to our protagonist’s overly creative imagination that is fuelled by paranoia – but yet we, like her, struggle to distinguish reality from the imaginary.

The performances from the entire cast are exceptional; Molly Windsor perfectly depicts her character’s naivety but also complex thought process as she meets different people and experiences different things that open her eyes to new and potentially life changing experiences. Due to Windsor’s performance and the enigmatic but inclusive storytelling we are able to relate to her character. Stefanie Martini is also excellent as the seductive and older Jade, who is very much one of the main catalysts of Ruth’s character arc.

Make Up is a film that is put together with obvious painstaking detail; every single shot is filled with intentional and important details (some subtle, some not so much), and some of these details may seem to make no sense or be complete red herrings, but they are there for a reason, and create one of the most unforgettable cinematic experiences of 2020. From the sound design, to the visuals, to the performances, Make Up is a genre-crossing and enigmatic gem of a film that sucks the viewer into its deeply intoxicating and seductive atmosphere, and refuses to let go until the very last moment.

A film with a stunningly seductive cinematic atmosphere that sucks you in and refuses to let go; Make Up is coming of age story that successfully merges genres and is one of the most haunting and unforgettable cinematic experiences of 2020.