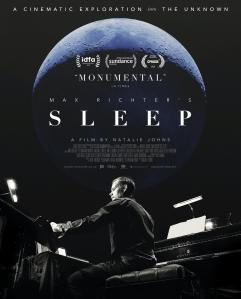 A documentary based around footage of live performances of the entirety of Max Richter’s 8.5 hour album Sleep which was performed overnight with each member of the audience having their own allocated bed to sleep in, that not only explores the making of the album, but the importance of music and sleep in this chaotic modern world and also reveals who the man behind the music is.

Though he may not be nowhere near as much of a household name as the likes of Hans Zimmer or John Williams, Max Richter has in my opinion composed some of the finest film scores of recent times; his seemingly simplistic and intentionally minimalist piano and string arrangements manage to captivate such incredible emotions and feelings. However, his 8.5-hour magnum opus ‘sleep’ is the main subject of this documentary – and deservedly so!

Whether it is his film scores or his artist albums, Max Richter’s wonderful and often ambient music has provided me with much needed solace from the stress and misery of day-to-day life, as so many of his compositions some up with such effortless simplicity the loneliness and isolation of the human condition. However, one of my favourite albums of his is ‘Sleep’, an album specifically composed to provide the soundtrack to the listener’s night’s sleep. Many of us like to fall asleep listening to music, but ‘sleep’ is specifically composed to be listened to by someone while they are asleep, and the album reflects the cycle of human sleep, and as the album has increased in popularity, so has the overnight concerts in which Max Richter and his small orchestra play the entire album overnight to an audience laying in beds. Initially it was just a few people at a radio studio in London, but since it has been the Sydney Opera House (on a suitably rainy night) or a large park in central Los Angeles. At the start of every concert Max informs the audience that there are no rules, and whether they choose to stay awake the entire time or drift in and out of consciousness, it is a very personal experience for each person.

This documentary works on many levels and is very much open to all viewers: it is a tribute to one of the best classical albums of recent times, an engaging examination of the human condition and the crucial role that music plays in our life and also a very candid film about the incredibly humble man behind the music. For anyone who does struggle to sleep I do thoroughly recommend they listen to ‘Sleep’ or ‘From Sleep’ (the much shorter album) as it does genuinely work as a perfectly calming  antidote to the extreme stress, misery and anxiety that modern life does often bring.

This film certainly does not even attempt to provide any answers to the anxieties of life in the 21st century (and that is actually pre-Covid!) but it does examine brilliantly the relationship between music and how it provides solace to so many of us. Max Richter’s Sleep is certainly a film best experienced on the big screen as it portrays perfectly the power of Richter’s music and allows the cinema audience to almost share the dreamlike state of the concert audiences that are laying in beds at the live performances. Music plays an essential role in the lives of so many people, and for those of us where music is our closest companion in those darkest moments this film certainly serves as pertinent reminder of that – and this is reflected in some of the interviews where people discuss what Max Richter’s music means to them. 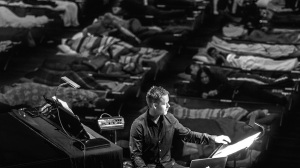 In between the performances are some refreshingly personal interviews by Max Richter in which he reveals the extreme struggles that he experienced before he found a level of success. There are of course so many budding musicians and composers out there, just like Max Richter originally was, and the personal stories that he tells of his struggles to find success do serve as a great story for all budding musicians that they should not give up, and what is also refreshing is that he remains extremely humble and deeply appreciative of the success he now has, and we should be deeply appreciative for the fact he did persevere and has provided us with some stunning musical compositions, especially Sleep, as many of our lives would be seriously lacking without them – I know mine would be!

Max Richter’s Sleep is a stunning documentary that works on many levels; it is an intriguing story of a great composer and also a captivating examination of the role of music in modern day life and how it may just be our last place of solace. For anyone who loves classical music or indeed has any kind of soul, this is an essential documentary.

An extremely passionate and (semi) opened minded film reviewer, with a hint of snobbish.
View all posts by MoodyB →
This entry was posted in All Film Reviews, Documentaries, The Best of 2020 and tagged Anxiety, british cinema, british film, documentary, entertainment, film, film music, film review, Max Richter. Bookmark the permalink.