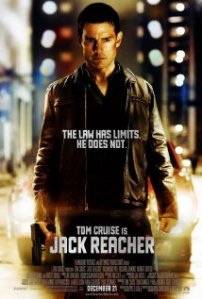 Five innocent people are shot down by a trained sniper and due to plenty of what appear to be careless mistakes all the evidence points to one man, James Barr (Joseph Sikora) who the police swiftly arrest. The man protests his innocence and when asked to sign to say he is guilty simply writes ‘get Jack Reacher’. Seeing this on the news, Reacher (Cruise) arrives, however due to an attack in a police van the suspect is in a coma. Ex military but now a drifter, Reacher knows the man but is determined to put him down especially after a crime he committed while serving in the army but got off on a technicality. Reacher is forced to team up with Barr’s defence lawyer Helen (Pike) still determined to prove Barr’s guilt. Reacher is then shocked (though we aren’t) to realise that Barr is actually innocent and was set up, and Reacher and Helen must go deep to investigate why and by whom.

Oh Tom Cruise! Just like Tom Cruise Oblivion, before that we also had Tom Cruise Jack Reacher though admittedly that sounds very silly it is essentially true. His name is pretty much as big as the film title on the poster and as usual this film is all about him. It was a (not so) shocking revelation to realise that he was also the producer of this film. This is not a criticism as I am a big fan of Cruise and it is obvious that he is having a good time in his roles. This may well be of course because he is always centre of attention, Tropic Thunder a notable exception. Jack Reacher is once again a committed and fully focussed performance from Cruise and the fact everything is all about him is almost both what is good and bad about Jack Reacher. As this is a Tom Cruise film, I give an advanced warning that this has forced me to inevitably write basically a Tom Cruise review.

I have never read the books, but have heard very good things. I do however know that in the books Reacher is 6’5” and we all know that Cruise is a little shorter than that. I know this upset a few of the fans, but I find it irrelevant as book and film are different mediums and best not compared. This is most definitely the case if the book has been made into a Tom Cruise film. This is Tom’s character now and what he has produced is a very likeable, if slightly clichéd, antihero. I found this to be a very solid, entertaining and watchable thriller but no more than that. However, I don’t know how all the twists are presented within the book but I did find them all rather predictable within the film. The story itself is potentially interesting, but never particularly surprising. This unfortunately produces what does actually feel like a rather generic and very average thriller. Casting Werner Herzog as the villain was a masterstroke and one to please film connoisseurs. This may have been a cynical move to get film snobs who dislike to Tom Cruise to watch it, but I can only speculate on that one. Herzog is seriously under used, as are the rest of cast who all give solid performances. They all naturally play second fiddle to Cruise both in screen time and their character’s intelligence.

Now this brings us inevitably back to Cruise, he is obviously fully committed to this role and is desperately crying out to have a Dirty Harry type franchise on his hands. That may not happen as the box office performance was not spectacular. For me it was the presence of Cruise that made a very solid, but average and flat thriller just that little bit better. His obvious commitment, energy and enjoyment make the whole film so much more watchable and entertaining. Of course along with that also comes the fact that this does just feel like a two hour ego trip. It does feel that other characters are intentionally a little slow just to make Jack look that bit better, and he is of course charming, cocky, confident , has a great memory, is always one step ahead of everyone and every bullet misses him. This is all summed up no better than the cheesy voice over at the end which basically describes what a great guy Jack Reacher is. Despite this being a rather intentionally humourless film, I personally found it very funny. Cruise makes what would otherwise be quite dull and talky scenes infinitely more watchable in my view, simply because he acts like a kid at Christmas playing with his new toy. The cheesiness and sheer damn perfection of his character is so ridiculous it has to be laughed at. I know that there are plenty of people who do not like Tom Cruise, and my advice to those people is to simply avoid this film. If you dislike Tom Cruise then Jack Reacher will in no way change that sentiment and only enhance it. Cruise appears to have developed a good understanding with director McQuarrie (maybe because Cruise is the boss) and the action is all very slick and well handled. Though the final action sequence was perhaps a little too overlong and repetitive, and felt a little too much like the latest Call of Duty game.

Tom Cruise haters avoid, otherwise this is a cheesy and perfectly enjoyable thriller that is basically all about Tom Cruise. It is predictable and forgettable, but brought to life by Tom Cruise’ unique enthusiasm and energy. If you have a couple of hours to fill and want to be entertained but not particularly challenged then you could do far worse than Jack Reacher.