WHAT RICHARD DID (Lenny Abrahamson, 2012) 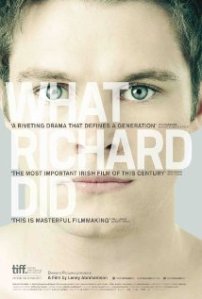 Dublin teenager Richard Karlsen seems to lead a perfect and privileged life. He is good looking, popular with everyone he knows and is set to go to a top university and play rugby at the highest level. When Richard begins a relationship with Lara (Murphy) an ex girlfriend of one of his rugby team mates, feelings of jealousy and paranoia start to appear in his previously unflappable temperament. At a party, a combination of heavy drinking and his insane jealousy lead to a chain of events that ends up in tragedy that shatters his life and the lives of those closest to him.

As soon as one character says to Richard “It seems you have everything planned out”, alarm bells immediately start to ring. In fact this film makes no secret that things will go wrong for our protagonist, and this is one of its strengths that produces a compelling film. There is a sense of dread hanging over the narrative like a dark cloud as we wait for something to go wrong. Despite the predictability I personally found this enhanced the emotional power as while watching everything going seemingly perfect for Richard the knowledge that it will all go wrong makes it only the more poignant. Though this is of course not exactly the most original storyline it still produces an authentic raw emotional power. When the inevitable tragedy occurs we are only poignantly reminded that as flawed creatures we all capable of finding ourselves in this situation.

After the accidental tragedy occurs the challenge for this film was always going to be to maintain a second half as strong as the first. I really liked Mean Creek but personally felt it didn’t really know how to end as strongly as it began. Thankfully this appears to be a director in charge of his film and the low key sombre realist tone is thankfully maintained throughout the narrative. The cinematography is very grey and it feels that the sun never actually shines in any scene, so perhaps not a good tourism advert for Ireland but it does add a cinematic quality in what otherwise does feel a tad like a TV drama. We do find ourselves genuinely feeling sympathy towards the protagonist and share the conflicted feelings that are destroying him. I won’t spoil how it ends, but I felt the plot developments were appropriate and handled very well.

I have read some reviews criticising the dialogue, I found the dialogue to be realistic and appropriate of how I think Dublin teenagers would speak. There are also some very impressive performances from the young cast which adds to the emotional involvement, we were all that age once and can certainly relate to the emotions they go through. Though this is no masterpiece, I felt this was a very solid drama depicting a perfectly possible everyday situation with integrity and honesty. At less than ninety minutes the film never feels flat or like it is just trying to be filler. Every scene is important and has a revelation of some kind about a certain character producing a very engaging experience. If you are looking for something to cheer you up then I would not recommend this, however if you are after a well made, thoughtful and poignant drama then I would recommend indeed finding out What Richard Did. Terrible pun – Sorry, but I couldn’t resist!

An extremely passionate and (semi) opened minded film reviewer, with a hint of snobbish.
View all posts by MoodyB →
This entry was posted in All Film Reviews and tagged drama, entertainment, film, film review, movie review. Bookmark the permalink.