BURFORD BACK IN TIME: THE MOUSE THAT ROARED (Jack Arnold, 1959) 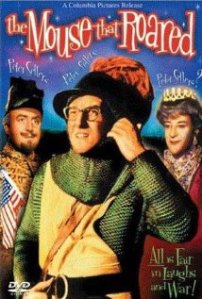 The Duchy of Grand Fenwick, situated in deepest Europe, is the smallest country in the world but thrives due to high demand for its unique wine. When an imitation is produced by the USA their economy suffers disastrous consequences. The Queen (Sellers) and the Prime Minister (Sellers again) decide the best course of action to rescue their economy is to declare war on the richest and most forgiving country in the world (USA) but lose and live of the very generous aid the ever charitable Americans will give them. After deciding to ‘bravely’ lose the war they decide to send Tully Bascombe (Sellers once again) to lead on army to New York to immediately surrender. Unfortunately when the army arrives there is a Governemnt ordered mass evacuation due to the invention of a Q bomb. Somehow the Gran Fenwick army capture the Q bomb and its creator and win the war and the world’s greatest powers descend on Gran Fenwick to become their ally. They are now one of the world’s most powerful nations, but what the hell are they going to do with all this power?

Peter Sellers is in my view one of the greatest comic actors of all time and The Mouse that Roared is predominantly an advert for his incredible talent. He plays three characters here and as usual his comic timing is spot on. However there is more to this film than that as contained within the narrative is some biting satire that is as relevant today as it was back then. The whole take on world wars is still relevant and the scene when diplomats from various countries play a monopoly style game called ‘diplomacy’ proves that there is genuine wit and just a total reliance on Seller’s slapstick comedy. Of course the comedy does feel a little simple and a little dated, and some scenes drag a little due to the fact this film is over 50 years old but it is still tremendous silly fun. At less than 90 minutes this film does not outstay its welcome and is extremely easy to watch. If you are looking for something to watch that is both fun but genuinely amusing too then The Mouse that Roared is perfect.

An extremely passionate and (semi) opened minded film reviewer, with a hint of snobbish.
View all posts by MoodyB →
This entry was posted in All Film Reviews, Burford Back in Time and tagged british cinema, british film, comedy, entertainment, film, film review, movie review, peter sellers, satire. Bookmark the permalink.