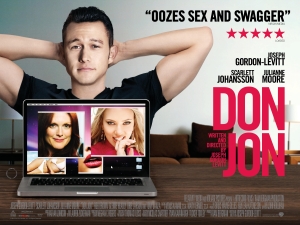 An actor’s first foray into being the writer/director, especially when they are also the film’s protagonist, can be a self indulgent affair, and from Gordon-Levitt’s smug grin on the poster and DVD cover of Don Jon this is certainly a film that suggests that. Well, our protagonist is an absolute chauvinist prick, the sort of person we have surely all seen on nights out and just thought to ourselves “I hate you”, however Gordon-Levitt never asks us to like him, and in turn there is never any defence of Jon being the way he is. We are just told the brutal facts of how Jon lives his life, and admittedly this frank honesty (and Gordon-Levitt’s effortless screen charisma) does help to produce a protagonist that may be on the surface unlikeable, but is without a doubt compelling. This is certainly helped by the overall realism of the character.

Don Jon most certainly sticks to the much fashioned three act structure of filmmaking which serves as both strength and detriment to the narrative as a whole. In the first third of the film, as we are told all about Jon’s chauvinism and macho attitude and porn addiction it is all told in a snappy way with rapid editing that is good fun to watch. The second half is his relationship with Barbara which admittedly does provoke some interesting ideas and debates about 21st century ideologies when it comes to relationships. Then the final third sees the introduction of Julianne Moore’s character where the narrative seems to take a completely different tonal and stylistic approach.

The final third and the introduction of Julianne Moore, who is as always a good screen presence, unfortunately leads to a final third that descends into predictable cliché. It does not by any means ruin the film and there are still some interesting moments, with Gordon-Levitt and Moore providing depth and sympathy to their characters that the script does perhaps not provide. However by the end it may have a nice neat ending, but I could not help feel Don Jon was a case of wasted potential that could have been a bit braver had it examined its subject matter a little bit deeper (no pun intended – that would be wrong).

A cocky and confident directorial debut form Gordon-Levitt who also provides us with a charismatic and engaging protagonist, Don Jon is often good fun from start to finish. However, when trying to deal with the serious stuff for me just descends into predictable melancholic cliché instead when it could have provided a more intriguing emotional punch at the end.