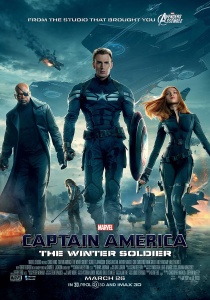 Still struggling to adapt to life in the 21st century, Steve Rogers lives a reasonably peaceful life in Washington D.C. (the location of S.H.E.I.L.D. headquarters), and is of course still working for S.H.I.E.L.D. After S.H.E.I.L.D security is severely compromised with the help of a mysterious metal armed assassin known as ‘The Winter Soldier’, Rogers is faced with the question of whether he can trust anyone in this modern world and so is forced to abandon S.H.I.E.L.D. and go his own way with every S.H.I.E.L.D. agent ordered to hunt him down. With the help of Natasha Romanoff (Johansson) and en ex fighter pilot named Sam Wilson (Mackie), the three are forced to go off the grid to uncover the source of this threat, leading to an even bigger revelation that could threaten world security. Now the three of them face a race against time to stop this apparently unknown enemy and the seemingly super powered assassin that is The Winter Soldier.

Good ol’ cap certainly has a lot to thank his friends for; because surely on the back of the non-event that was the first film (no matter what its profits) surely the first Avenger would not have got a sequel? Even in Joss Whedon’s tremendously enjoyable team up it felt like his character was a little bit sidelined by much (in some cases literally) bigger characters, or maybe that was a contractual obligation of Robert Downey Jr.’s ego? Either way, as part of Avengers phase 2 the captain has been given a second chance, though with the success of the most recent Iron Man and Thor additions, the pressure is surely very much on his broad shoulders. Well I am pleased to say that with the latest instalment showing us how he is adapting to the modern world, they have delivered the goods to produce an extremely enjoyable blockbuster that ticks all those Saturday night boxes.

Chris Evans said in an interview that they have tried to go for more of an old school conspiracy political thriller. Well, this is not exactly that, but it is these elements and Roger’s trust issues with the modern world that drive the plot forward. Admittedly they won’t have anyone on the edge of their seat as ‘twists’ can be seen a mile off (I think we all know the true identity of the winter soldier? It is also pretty obvious who the bad guys actually are), and this being a comic book film, we have plenty of ridiculously handy technology for both sides that is convenient for the plot. However these are forgivable as despite the 136 minute running time, the plot itself goes along at a pretty rapid rate and is kept together by a succession of thrilling set pieces, a sharp script and very likeable performances.

Despite having a background in comedy and this being their first foray into the action genre, Anthony and Joe Russo make good use of $170 million budget to certainly make things look expensive. However expensive CGI is saved for the few big set pieces with plenty of scenes relying on old good old fashioned fisticuffs which are also very well choreographed. The sound design for these sequences is also well done, with every crunch and thud certainly pounding out of the screen.

The action also enables our titular hero to flex his muscles that bit more; he is of course still a bit of a goody-goody at heart, but in CA:TWS  he certainly fights tough when he needs to. His suit is a more suitable and less camp dark blue and he most certainly utilises his all-famous shield as the weapon it was designed to be. Evans too excels, he was always a likeable screen presence, but here uses a little bit of that swagger that made the human torch the best thing about The Fantastic Four combined with honest/naive intentions to emerge far more confident and convincing in his role this time around. Though the Captain is the title of the film, having a few friends around certainly helps and Scarlett Johansson, Samuel L. Jackson, Cobie Smulders and newcomer to the franchise Anthony Mackie all provide welcome company. Meanwhile Robert Redford provides a bit of old school gravitas in a role he could do in his sleep.

Though working best foremost as an action film, CA:TWS also has plenty of well judged comedy. Iron Man had Robert Downey Jr.’s trademark quick wit and put downs and Thor 2 was, well apart from being bonkers had plenty of visual gags, for the slightly more ‘realistic’ (given this is a Marvel film) tone of CA:TWS the humour is very much in the dialogue of Christopher Markus and Stephen McFeely’s very sharp script. Good witted banter flies between all of our good guys, with Jackson and Mackie getting a vast majority of the best lines.

As the plot develops at a consistently rapid pace there is most definitely never a boring moment in the entire narrative and some of the latter plot developments bring some extremely interesting directions to the entire franchise. As someone who found the first one very boring, I was as sceptical as they come, but for an entertaining fun escapist blockbuster, second time around the captain has most definitely delivered the goods. Naturally, there is a mid and post credit sequence, the former serving as a little teaser of the new additions in Avengers: Age of Ultron.

Though admittedly is wasn’t hard, Captain America: The Winter Soldier disproves the rule  that sequels are never better to deliver a leaner, meaner and more developed protagonist in the Captain, a sharp script and a consistently fast pace to produce an extremely satisfying action blockbuster.