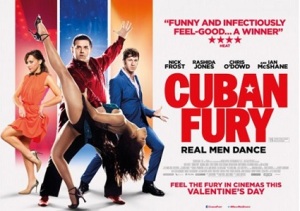 Bruce Garrett (Frost) was a formidable salsa champion as a teenager, but after being beaten up for his passion, decided to hang up his dancing shows for good and is now an overweight introverted office worker at an engineering company and he is often the subject of verbal abuse from the office alpha male, Drew (O’ Dowd). However, when their gorgeous new manager, Julia (Jones) arrives at the company, both men take a liking to her, with Drew almost certainly going to be the winner. However, after Bruce discovers that Julia has a passion for salsa dancing, he decides it is finally time to dust off the shoes and hit the dance floors again to see if he still has the moves and passion for salsa, then maybe this time he can actually be the one that stands out and win Julia over.

Nick Frost will be the first to happily admit that he is not a trained actor and may have got a bit lucky to be where he is today by essentially being Simon Pegg’s best mate, in fact from seeing him in interviews he seems like a humble and very decent bloke. Well, he has made a career out of playing characters that are essentially him and often Simon Pegg’s best mate too. That particular partnership went progressively downhill in terms of the quality of the output they produced and it is certainly interesting what he can now do as the lead in his own comedy. Well, having originally written the ‘idea’ of Cuban fury (that is what imdb says) and being executive producer, this is very much his project and when watching Cuban Fury it does feel that very much the entire film is built around Nick Frost and his usual onscreen persona.

So in Cuban Fury there are no surprises in that once again Frost plays a very likeable and well meaning slightly overweight unlucky in love character®, and he does play it well. Then that does not necessarily mean it is a good performance or a display of magnificent acting (as I said earlier, it does feel the entire narrative is built around Frost’s typical onscreen persona), but there is no denying that Frost is a very likeable screen presence. It his effortlessly likeable screen presence and the fact that he deserves respect for knowing what he is good at and sticking to it as to why Cuban Fury in my view just about works as a watchable, if slightly forgettable genre film. In fact the whole film seems very much aware of what it is as it ticks off its genre checklist very diligently as the narrative goes along nicely. Like Nick Frost, Cuban Fury is very likeable and watchable while on screen, but also never really even tries to surprise anyone.

Though Cuban Fury is a 15 certificate for a few too many f-bombs in the script and perhaps some of Chris O’Dowd’s seemingly improvised aggressive sexual language, this is by far the biggest risk the film ever takes. It is almost reassuring in just how predictable it is, but yet it seems all those involved are happy to embrace the clichés and genre tropes and just have fun with it, and to be fair the film is fun while on screen. All the actors certainly seem to be really enjoying themselves and not just happy to be on autopilot and pick up their money like in similar films. Director James Griffiths provides visual flair to the dance sequences and they are well choreographed, likewise a car park dance-off between Bruce and Drew is very well put together.

Now, of course Cuban Fury is marketed as a comedy, and though its genre-by-numbers approach to its narrative may mean it will not take the risks other British comedies may attempt, the amount of authentic laughs were in my view genuinely disappointing. This film has some truly funny comic actors, but for me only Kayvan Novak produces the laughs, and that is more down to his talent as a comic actor than the writing in my view.

Performance wise; as I have already said, Nick Frost is perfect in the role but it is a role written for him (essentially by him), and he may evoke our sympathy, but not any laughs. Likewise the supporting cast are all good in their various roles, but the script’s tendency to erk on the side of caution almost prohibit their comic talents. Though Rashida Jones has very little to do in what is quite a generic role in what is very much a boy’s own film. For me the weakest link in Cuban Fury is Chris O’Dowd; he has made a career out of playing roles similar to Nick Frost’s here, and proved to me in Calvary that he does not have the range to do anything else. So here he is highly unconvincing as the apparent alpha male, and though I am aware we are supposed to laugh at him when he makes his stupid misogynistic comments, they are just really irritating. Maybe if this character was played by a more suitable and far more convincing actor in this role, then Cuban Fury may have been a far better film, especially with the 15 certificate allowing more room for comic manoeuvre.

Seemingly happy to stick to the Richard Curtis guide to genre film making; Cuban Fury plays it safe throughout to produce a film that is never less than watchable, but nowhere near as funny as it could have potentially been.