Film music for me can play a vital role in enhancing the experience and here are, in my opinion, the 10 best scores of the year. When I say ‘score’ I refer to the non-diegetic score that has been composed solely for the film and not the soundtrack that may include songs that were made long before the film. For example, Pride featured some superb 80s tracks and then the soundtrack was a double disc album of (perhaps slightly cynically selected) tracks from the 80s, but as good as that may be as a ‘best of the 80s’ compilation, I am only interested in the score.

James Horner is no stranger to composing scores that are intended to represent magical and colourful environments; his score to Avatar was simply stunning and without a doubt enhanced the visuals of the film. His score to Maleficent stuck to a similar formula; featuring rousing strings and choral arrangements that perhaps at times were a little intrusive on the film in the same way that the excessive CGI was, but it also at times enhanced the feeling of magic and wonder. However, when listened to on its own without the contrived script of the narrative to go with it, his score comes to life all on its own to create some beautiful dream-like soundscapes that do transport you to a magical land which you can create in your own imagination.

Wally Pfister’s directorial debut is featuring in many ‘worst films of 2014’ lists, and deservedly so as though I would argue that I have seen far, far worse films this year, it was certainly a disappointment considering its potential and the talent involved. However no criticism can be directed in the way of composer Mychael Danna; instead of opting for the generic Hans Zimmer-style pounding strings that so many composers go for, Danna went for a far more low key approach to produce a beautiful score that will probably never get the credit or accolades it deserves due to Transcendence being such a poor film. It is best to think of this not as soundtrack or film score, but an artist album, and when listened to at home Danna’s beautiful string and piano arrangements make for very relaxing listening. 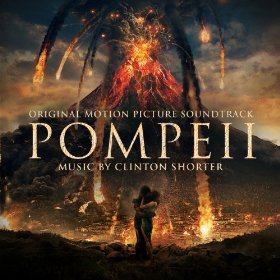 Paul W.S. Anderson’s film certainly received its fair share of criticism for various thoroughly deserved reasons and gets two honourable mentions in my review of 2014, but Clinton Shorter’s rousing score was note perfect for if Pompeii had actually been the superb epic it could have been (though that would almost certainly have required having a different director for a start, as well as script etc.). Though his score may not exactly be original and is without a doubt from the handbook of historical epic film scores with its sweeping string arrangements, big choral moments and rousing drums combined with the slower movements for the films more ‘emotional’ moments. It adds to the enjoyment of what is for me 2014’s guiltiest pleasure but is also a rousing listening experience on its own.

Though despite a superb leading performance from Mia Wasikowska, Tracks was ultimately not the emotionally involving or satisfying film it really should have been, and considering just how beautiful Garth Stevenson’s ambient score of this film was, that is a real a shame. Along with Wasikowska’s committed performance, Stevenson’s score is by far the best thing about Tracks and makes the film far more involving than it deserves to be. When watching Tracks I remember finding a deep emotional connection with the score but actually completely forgetting about the protagonist and what she was up to. Tracks is worth watching once, but Garth Stevenson’s score is worth listening to again and again as each time it takes you on your own personal journey of self discovery.

After his earlier films all had excellent scores composed by David Julyan, since Batman Begins Christopher Nolan has formed a deep collaborative relationship with Hans Zimmer that starts between them before a single scene of the film has been shot. It is quite fashionable to dislike Hans Zimmer these days, and though I find that to be deeply unfair I must admit that a lot of his scores are quite samey and at times overbearing (often having to make up for the film not being too good). However, with Inception the deep understating Nolan and Zimmer have was there for all to see and hear, and Zimmer’s score to Inception is in my view, one of his very best. With Interstellar Zimmer wanted to once again go for something different and decided that a vast majority of the score be played on the very grand instrument that is the church again. Interstellar is a film with some breathtaking moments that need to be seen on the biggest screen possible and thanks to Zimmer, turned up as loud as possible. It is a score with some beautifully composed dramatic pieces that perfectly capture Nolan’s vision for the film.

Yann Gonzalez’s erotic drama was certainly very unique in terms of its style, but was a film that I found strangely moving, and this emotional involvement with the film’s bizarre range of characters and strange narrative was only enhanced by the score by his brother Anthony (otherwise known as M83). M83’s music has always been very cinematic and he proved that in 2013 when his epic score for Oblivion was the best thing about the film, and once again he has proved it with his more intimate score for You and the Night. Combining melancholic piano riffs and vocals with his usual rich electronic soundscapes, his score not only enhances the imaginative and dreamlike narrative and visuals, but makes for emotive listening when listened to in isolation.

As a film, Noah was certainly a mixed bag, but Aronofsky’s regular composer Clitn Mansell was on his usual top form when working with Aronofksy and once again proved just how big a part his scores play in Aronofsky’s films. At times using a similar approach to his epic score to the underrated The Fountain, from start to finish Mansell’s score is a truly stirring experience; the rousing string arrangements only complement the stunning visual moments of Noah and enhance the slightly less exciting moments. The film is at times hard work to watch and so I would only recommend it as a onetime viewing experience, however Mansell’s score deserves unlimited listens.

3. The Hobbit: The Battle of the Five Armies – Howard Shore

It was a film that was for me the weakest of the six, and in some ways so was Howard Shore’s score to it (in context though these are extremely high standards). Shore’s score to TBOTFA is still a rousing and involving composition that enhances the viewing experience of the film and serves as a great listen in its own right, even though this may be helped by the memories we all have from The Lord of The Rings. Shore uses familiar riffs from TLOTR when the narrative requires it, but he makes sure to do sparingly so to allow new riffs that represent these new characters to dominate the score. Shore may ultimately not adopt a new formula for his scores to The Hobbit films but “if it aint broke”, and it is two discs of soaring string and choral arrangements to create the same magical world that only serves to  complement the best moments of what is an admittedly bloated and uneven final chapter. When listened to in isolation is when it is at its best as it reminds of all the wonderful visual memories from Jackson’s films.

French composer Alexandre Desplat is quite prolific and often composes scores that are in my view perfectly adequate but never overly memorable. However, for The Grand Budapest Hotel Wes Anderson and Desplat attempted to create a new genre of music that was supposed to be the music of the fictional country that the film was set, and in doing so Desplat created a score that not only enhances our enjoyment of and involvement with the narrative, but is a character all of its own. Without Desplat’s score which uses a vast majority of instruments and sounds to go with what is happening on screen and what character we are seeing, The Grand Budapest Hotel would not have been quite as immensely enjoyable as it was (though the script, direction and performances also played an essential part). 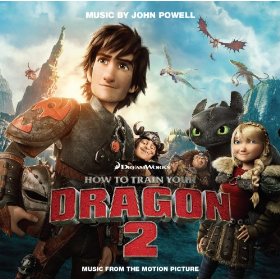 As a film How to Train Your Dragon 2 is a soaring visual spectacle with a story that is genuinely moving and involving and this is only enhanced by John Powell’s stunning score that matches the visuals and the storytelling. From start to finish it is a score of consistent high quality, and a score that sets standards so many composers for blockbusters should try to set for themselves. For the film’s exhilarating visuals we have equally exhilarating string arrangements that when you close your eyes and listen to you do truly feel like you are soaring through the sky. One of the reasons HTTYD2 is so superior to most animated films is that it is not afraid to take on serious issues and themes, and the more melancholic and sombre moments of Powell’s score do truly tug at the heartstrings both when on screen and when listened to at home. Powell earned an Oscar nomination for his score for 2010’s How to Train Your Dragon; he most certainly deserves another nomination and perhaps win for his score to the sequel.