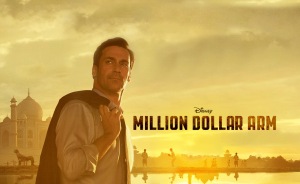 To save his struggling company that cannot compete with wealthier rival companies, sports agent J.B. Bernstein (Hamm) plans to find baseball’s next star pitcher. Seeing the business and marketing potential, Bernstein decides to go to India of which the national sport is cricket and he attempts to scout fast bowlers who can be trained to be baseball pitchers. Setting up a talent competition called ‘Million Dollar Arm’, he brings the two winners to America to be trained up and in the process learns some valuable life lessons himself.

The very last part of that synopsis sums up this very text book sports drama; Million Dollar Arm may be based on a true story, but it is a generic sports movie-by-numbers with the predictable character arcs, fish-out-of-water moments for various characters, all-is-supposedly-lost narrative developments and montages galore. At the centre of it all is john Hamm’s J.B. Bernstein and the arc of his character is outrageously predictable as he goes from a shallow money obsessed sports agent to… (Well, I don’t want to spoil it, but I think it is pretty obvious!)

In what is his first leading man role (the fact his name is in big letters on the posters would suggest that this was the intention anyway) Jon Hamm is his usual charming, charismatic and slightly smug self. It fits the character well, but is hardly a huge change of gear from Don Draper and so he is good enough in the role, but it is hard to know whether he has what it takes to be a Hollywood leading man long term that can consistently pull in the punters. The supporting cast are solid but unspectacular with Bill Paxton looking half asleep as a baseball coach and Alan Arkin literally being asleep most of the time playing the same grumpy character that he always plays these days, but with a flat script.

The fact is though that Million Dollar Arm often relies on Hamm’s natural charm to elevate the lacklustre, saccharine, sugar coated and borderline cynical writing of Thomas McCarthy’s script.

Million Dollar Arm Nails its colours to the mast at being a film from the step-by-step guide of how to make a typical and generic Disney crowd-pleasing sports movie and McCarthy and director Craig Gillespie never even try to make it anything else. There is no denying that Million Dollar Arm is well made, has Hamm’s natural charisma and is certainly highly watchable, but it lacks any emotional punch or true involvement because everything is just so safe and way too by the book. For the film’s entire two hours, it is never boring and its extreme predictability is almost in some ways ways reassuring, but a film of this kind needs those genuine punch-the-air moments, and Million Dollar Arm never really has those and ultimately proves to be a little underwhelming

An extremely generic and conventional sports movie; Million Dollar Arm is often elevated to be just about watchable by Jon Hamm’s natural charm, but its extreme predictability and lazy writing makes it overall rather underwhelming.