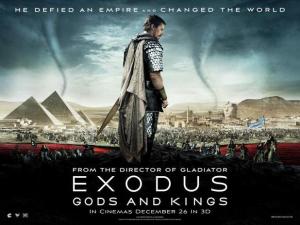 Egyptian princes Ramses (Edgerton) and Moses (Bale) are raised together as brothers, and have a bond to match it. However, soon after Ramses has become Pharaoh he discovers the true Hebrew parentage of Moses and banishes him to the desert, a sentence that would essentially result in death. However, God has plans for Moses; lead the Israelites from their state of slavery under Ramses rule. However, when the stubborn and arrogant Ramses refuses to negotiate it leads to consequences that will change the world forever.

Fair play to Ridley Scott; while no one else in Hollywood wants to make the necessary huge investment that is required when making a historical epic, he will happily give it yet another go. While the incredible (and deserved) critical and financial success of Gladiator spawned plenty of epics, it did almost feel that Scott’s enjoyable but flawed Kingdom of Heaven seemed to be almost a curtain closer for what was a series of films in what is a very expensive genre.

Well, Scott is back with his latest attempt at the genre, and once again keeps things biblical. Though Exodus: Gods and Kings is unlikely to have producers writing blank cheques to fund the next huge sword and sandals epic, it is certainly an enjoyable enough (if admittedly very shallow) sword and sandals romp.

When taking on any story that has such a high religious status and turning it into a film, it is always going to be met with fierce criticism. Well, I regard issues of ‘accuracy’ (lose definition of the word anyway, considering the source material) irrelevant, and of course the less said about the casting controversies the better; all I care about is whether it works as a piece of narrative cinema on the levels that historical epics should. Basically, it should be visually stunning on a grand scale with a deeply involving character driven narrative that takes the viewer on a journey.

Does Exodus: Gods & Kings do this? Well it certainly delivers on visual thrills and spectacle, but then given the fact it is directed by Ridley Scott and cost around $140 million to make means one could argue that should be a given. Nevertheless, Scott and his production team do create some stunningly epic sequences. Likewise Alberto Iglesias’ score that is at times equally intimate and stirring, and Dariusz Wolski’s sublime cinematography only enhance the epic and deeply cinematic feel of the film.

However, as spot on as the aesthetics may be, as they certainly helps to make Exodus undoubtedly a highly watchable and never boring experience, the film does lack any real substance, rendering it as ultimately a completely vacuous experience that certainly lacks the substance, engagement and magic of the genre’s best films. This is a shame as there certainly is scope to make the film’s two protagonists and their relationship a truly engaging and emotional centrepiece of the narrative. There are occasional hints at developing their own individual arcs, but yet the script written by four people (perhaps too many cooks and that broth comes to mind?) is disappointingly flat and the all of the narrative’s key moments, relationships and developments seem either forced, rushed or completely without reason in what does basically feel like a machine of a film – albeit a very well-oiled and efficient one with an impressively loud engine.

This is a shame as the two lead performances are solid; Christian Bale is his usual intense and shouty self, but brings his usual screen presence to the character of Moses, at times giving at least some apparent depth to his character. Joel Edgerton meanwhile has the tougher job in terms of having to keep a straight face while wearing some outrageous costumes, and though his performance does verge on camp caricature, it is adequate.

The supporting cast do not quite fare so well and are simply there to be at the mercy of the narrative; Ben Kingsley turns up when needed as the wise old character who only spouts out exposition, Aaron Paul just wonders around looking pissed off with everything, Ben Mendelsohn camps it up outrageously in a performance that is pure pantomime villain and Sigourney Weaver is simply there. Meanwhile God is portrayed as a rather snotty schoolboy prone to tantrums (!), this could have been effective in what is admittedly a very challenging character to show visually, but isn’t.

As the narrative goes along to its inevitable conclusion (let’s face it – we all know the story), Scott and his team of screenwriters never even attempt to bring any real depth or anything new to the story. However the wonderfully put together sequences, especially the battle scenes and the plague sequences, along with Bale’s trademark brooding intensity, at least make Exodus: Gods & Kings an entertaining, if extremely forgettable, visual ride.

It may have the trademark sweeping Scott spectacle, but this can only make up for the complete lack of substance and soul in Exodus: Gods & Kings so much. The visuals and performances make it never anything less than watchable and enjoyable, but no more.