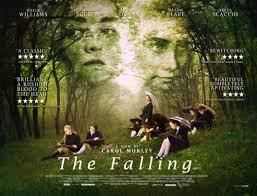 In 1969 at a deeply strict girl’s school, after a tragedy occurs within the school a mysterious fainting epidemic breaks out, threatening to completely destabilise the strict regime of the school.

As much as I love a slightly surreal mystery drama that tries to be unconventional, for me it still needs to have something at its core that is relatable, whether this be characters, central themes or just an overall sense of intrigue. It doesn’t even have to make any sense, as long as there is something worth investing in, then it can certainly be a rich and rewarding experience. Well, as much as Carol Morley’s film is undoubtedly very well made and acted, and certainly very rich in atmosphere, it is unfortunately lacking in its narrative conviction.

102 minutes is by any standards not a long running time, but yet The Falling is often an effort to watch as it is just often difficult to either care about any of the characters or the story itself, which is a shames as there is certainly plenty of scope with the narrative’s central characters to explore some interesting and very relatable themes. Unfortunately though the narrative certainly flirts with them, it never develops them to any particularly deeply rewarding or engaging level, which does render the whole viewing experience ultimately quite hollow and forgettable. I am of course not suggesting these should be spoon fed to the audience, but there are plenty of recent films that manage to explore with skilful and precise subtlety some powerful themes making for a deeply haunting experience (a recent example would be Foxcatcher), but The Falling simply lacks the substance and conviction to do this.

Likewise, though supposedly a film of mystery, The Falling also contains very little of that and so there is very little genuine intrigue attached to the film’s main narrative. The reasons behind the narrative events are always pretty obvious, and this just makes the continuous scenes of young girls fainting feel quite repetitive and bordering on annoying at times.

The film’s final third does provide some important revelations about Lydia (Williams), who is essentially the film’s protagonist, and though they do provide emotional resonance, they are, like what has fell (no pun intended) before it in the narrative are still somewhat lacking in true emotional reverence or catharsis.

This is all a shame, as the performances are all excellent from both the younger and older members of the cast, and the performances do in some ways elevate the emotional involvement of the narrative that the script simply consistently fails to provide. Game of Thrones Maisie Williams is excellent as the troubled Lydia, likewise is Florence Pugh as her more extrovert best friend Abbie. They both encapsulate the troubled mind set of their characters perfectly, as do the Maxine Peake as Lydia’s mother and Monica Dolan and Greta Scacchi as the school’s headmistress and teacher respectively.

This lack of conviction is very much a shame, as from an aesthetic point of view Carol Morley proves to be a very competent film maker. The continuous (but admittedly well put together) shots of autumnal woodland do certainly provide an element of atmosphere, but they most certainly can only go so far. Likewise Tracey Thorn’s wonderfully melancholic songs and score, and Agnés Godard’s lush cinematography only enhance the film’s rich aesthetics and undoubtedly make it very feel very cinematic. Despite the feelings of oppression, isolation, melancholy and sexual awakening that can be found within the narrative, Morley simply struggles to develop them fully, which is ultimately a real shame.

The Falling is a very well put together piece that proves that Carol Morley is most certainly an auteur to look out for in the future, but thanks to her lack of discipline, focus and conviction The Falling often feels like mood and atmosphere for the sake of it, and is overall hollow and forgettable.