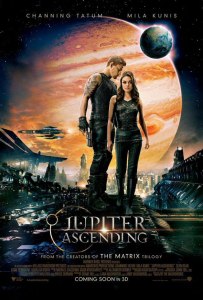 Jupiter Jones (Kunis) lives a very mundane life cleaning toilets for a living, but after her life is saved by a mysterious stranger named Caine (Tatum) she discovers that her destiny is to live a life of a much grander purpose; her genetic signature makes her the heir to an intergalactic fortune that places her in the middle of a family war that could change the universe forever.

In this day and age of all big budget films being sequels, prequels, remakes or comic book adaptations, any big budget film with a degree of originality is always of course more than welcome, meaning that if it is a failure it is at least an admirable failure. Well, ‘admirable failure’ were two words associated with the Wachowski’s last effort, which was the three hour century spanning opus Cloud Atlas, which I enjoyed, but many didn’t. While that was based on a book and was made with another director, the Wachowski’s have conjured up Jupiter Ascending solely from their own imagination. However, it was most certainly just as, if not even more, bonkers than Cloud Atlas.

There is most certainly much to admire about Jupiter Ascending; it has at its narrative foundation a potentially interesting and franchise building concept, and most certainly looks great with very impressive set design and stunning visuals. Despite being just after two house it never has a dull moment, but is unfortunately a totally vacuous narrative mess of a film that really does fail to utilise its potential. The story is all over the place with no real coherent structure, the dialogue is laughable and the performances are either one of two extremes; deadly serious or outrageously over the top.

If they did a better job with the premise, the Wachowski’s could have had a franchise on their hands, and though it appears that is the intention, it does seem unlikely as the narrative that unfolds pretty much annihilates this potential. It is a waste of time trying to figure out exactly what is going on and why, as not only is life too short and it will drive even the most coherent person insane, it does ultimately seem the Wachowski’s made it up as they went along and don’t really know either.

However, despite its many, many problems, there is no denying that while it is on screen Jupiter Ascending is great fun, even if that may be for reasons that the Wachowski’s did not actually intend. It is most definitely never boring, though this is partly down to that fact the often total randomness of what unfolds before the audience’s eyes has to be seen to be believed. However the fast pace, stunning visuals and well put together set pieces make for an entertaining space pantomime romp.

The performances too add to the entertainment, even if this does bring laughs at more than with; Kunis and Tatum are quite forgettable, but this is not really their fault as they are tasked with having to be the serious main characters who are given abysmal and hammy dialogue, and just almost get swallowed up by the outrageous special effects, nonsensical plot and the supporting actors around them overacting as if their life depended on it. 2015 Oscar winner Eddie Redmayne must have gone out of his way to make sure the academy didn’t see Jupiter Ascending before voting for him as he is horribly miscast and laughably outrageous as the film’s main (sort of) villain. Meanwhile Douglas Booth and Tuppence Middleton enjoy themselves way too much in their villainous roles, but are good fun to watch. Sheffield’s finest Sean Bean also makes a welcome and long awaited return to big budget films; he is very underused but does add his usual dependably gruff screen charisma when called upon, even though despite his character being some alien/bee hybrid (don’t ask!) he has an outrageously thick Sheffield accent!

Though I may have earlier stated and indeed (sort of) praised the originality of Jupiter Ascending, it seems obvious that the Wachowski’s have a few Terry Gilliam films in their collection at home. This is most apparent with one sequence in particular being stolen straight from Brazil, with Gilliam himself even turning up briefly in a blink-and-you-will-miss-it performance. Perhaps when turning up on set Terry Gilliam should have told the Wachowski’s to produce while he took over; The idea behind Jupiter Ascending directed by a Terry Gilliam at the top of his game; now there is a thought! Sadly that is not we get, but what we do get is utterly vacuous and nonsensical storytelling, but undeniably bonkers entertainment.

The Wachowski’s once again show flashes of great imagination and world building, but also a total lack of storytelling craft to create a film that is a total mess, but at least Jupiter Ascending is a fun and entertaining mess.