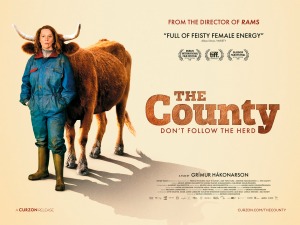 After the tragic death of her husband, Inga (Egilsdóttir) is forced to takeover the running of his debt-ridden farm. However, in doing so she discovers that his death may not have been an accident, and the local co-operative that is constantly exploiting and overcharging residents may well have some involvement. Inga decides to be the one that finally takes a stand against the corruption and injustice that has been a result of the co-operative’s mafia-like running of the local community.

I have always made the argument that there is nothing wrong with a very simple narrative that has at its centre a seemingly simple and almost cliché-ridden concept, but what makes a film great is what it ultimately does with this concept and its clichés – I was always taught that it does not necessarily matter what a narrative throws at a character, the most important thing is that we care about them and can relate to that character in some way. I am certainly a great believer of this philosophy – it is just a shame that mainstream cinema often doesn’t seem to care for it. However, away from the mainstream there are still a plethora of films that have remembered this very simple, but very important idea – and The County is proof of that.

At the heart of the narrative of The County is a very simple premise, but less is frequently more, and thanks to this (combined with great writing and performances) we are given characters who we can relate to and genuinely care about. Context is always important, and within the context of the narrative and the characters that are within it, what happens is very much a big deal – and we cannot help but share their concerns.

As tends to be the norm with Icelandic films, subtlety is often the key, and the depiction of the darker tones of the film and the co-operative’s mafia-like approach to its control of the local community is depicted with an unnerving level of subtlety that hangs in the air of the narrative like an unpleasant but unavoidable smell – there are certainly a few question marks over what caused the death of Inga’s husband. Both the co-operative’s approach and our protagonist way of dealing with them is dealt with subtlety and a fair amount of jet black humour, and it is undoubtedly a compelling battle to watch as Inga tries to enlist the help of local farmers to join her fight.

Icelandic directors are almost given an unfair advantage in that their country contains such breath-taking and cinematic scenery, and in The County (as with so many Icelandic films) director Grímur Hákonarson lets the characters and the scenery do the work, by providing us with suitably long takes and static cameras.

The County is of course at its heart a classic underdog story, and we cannot help but route for our protagonist as she tries to lead the fight against the powerful oppressors. Grímur Hákonarson of course makes sure to keep things realistic, and though The County may ultimately lack the genuine heartfelt warmth of his previous film Rams, the result is still a wonderfully engaging and delightfully watchable, and rather unique, human drama.

A deeply engaging underdog story of one woman’s fight against a local corporate oppressor; The narrative concept of The County may be as unique as its setting, but thanks to the script and performances it grips and entertains from start to finish.