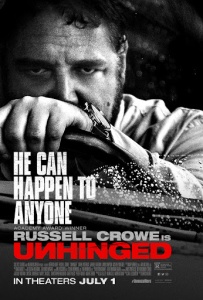 Recently separated mother Rachel (Pistorius) has already had a bad morning and is running late for work when she experiences a road rage incident at some traffic lights with another motorist (Crowe). After she refuses to apologise, this seemingly very unstable man becomes hellbent on taking out the anger he has on the world on Rachel by teaching her some deadly lessons involving those she loves.

Unhinged is regarded as the first ‘big’ film to get the big screen release in cinema’s slow and cautious return in the UK, and as much as those involved deserve credit for being willing to release it on the big screen, there is certainly a huge degree of irony that so much of the film is actually no better than a straight to DVD b-movie. The plot is basically a combination Falling Down and Duel, but without any real substance – in fact the only real substance is Russell Crowe’s large belly. While there is admittedly within the opening credit sequence and the occasional moment in script that references what the stresses and strains of the modern world is doing to some people, and the opening scene provides a rather unpleasant introduction to Crowe’s character, it is hard to believe that Carl Ellsworth genuinely believed that his script is actually making any genuine points about, well, anything – the story is just too ridiculous for that. While we all certainly feel rather annoyed about the injustices of the world and some people are dealt particularly bad hands that can lead them to commit desperate and immoral acts, and there are examples of some road rage incidents leading to gruesome crimes, no one person goes as far as Russell Crowe does in Unhinged ­– dramatic license or not.

Apart from perhaps the budget, the only thing that may well have allowed Unhinged to get a big screen release is the fact it stars an Oscar winning big name. To Crowe’s credit, he does seem to know exactly what film he is in, and certainly goes for it with his ridiculously intense, angry and (quite literally) larger than life performance. Actors often say that they enjoy playing the villains more than they do the heroes, and Crowe does seem to be really enjoying himself. As soon as I read that the role was first offered to Nicolas Cage I could not help but wish that he took the offer, but firstly it may have meant that the film may not have got a big screen release or had quiet as big a budget (Crowe does still have much clout than Cage), but Crowe does demonstrate a fair amount of Cage Rage anyway, and there is no denying that his performance does make Unhinged that far more watchable than its script deserves it to be. The rest of the cast are solid enough in their generic roles that are very much at the mercy of the narrative, but this is of course very much Crowe’s film – and I am sure that was contractual! 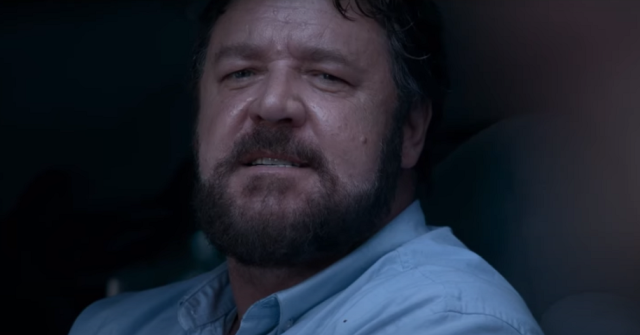 As the generic plot plods along and diligently ticks off genre conventions and clichés it is admittedly entertaining escapism, and while it is undoubtedly never genuinely edge of the seat or ever really pulls any great surprises or shocks, it is extremely watchable. What also does help is the fact that it is well made and director Derrick Borte does put together some decent set pieces that feature the loud crunches of cars hitting one another, while there are certainly a fair few gruesome deaths for innocent bystanders that further confirm that all involved care very little for providing a film of any actual substance. So, though the actual story may well be like something straight from a b-movie, the set pieces certainly do justify the film’s existence on the big screen to an extent.

As Unhinged comes to its conclusion it has absolutely no surprises, and so once over it will certainly not live long in the memory, but thanks to Crowe’s extreme overacting and some decent set pieces it is a perfectly entertaining experience to commemorate cinema’s welcome return in the UK.

Though such a generic and formulaic genre piece with a b-movie plot and script is perhaps not quite the film we would all truly like to be the one that represents cinema’s welcome return, but thanks to a fully committed Russell Crowe and some well-staged (and quite cinematic) set pieces, Unhinged is perfectly watchable nonsense, and an acceptable place to start.

An extremely passionate and (semi) opened minded film reviewer, with a hint of snobbish.
View all posts by MoodyB →
This entry was posted in All Film Reviews, Mindless B Movies, Uncategorized and tagged b-movies, Carin Pistorius, entertainment, film, film review, russell crowe, thriller. Bookmark the permalink.